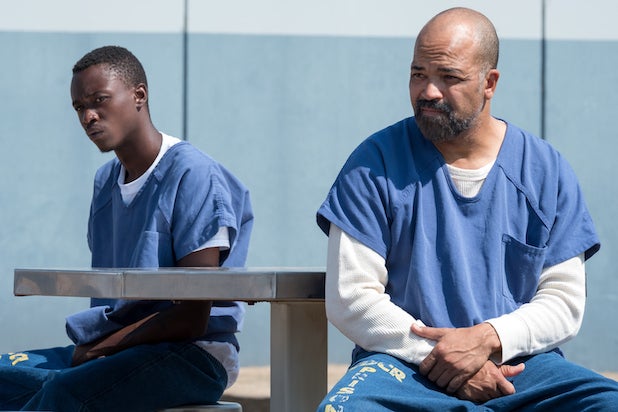 The filmmakers behind “All Day and a Night” dig a big hole for their main character right off the bat. No sooner have we met aspiring Oakland rapper Jahkor (Ashton Sanders) than we see him gun down a man and his wife in front of their 10-year-old daughter — quietly, coldly and without a moment’s hesitation.

Under normal circumstances, audiences are accustomed to feeling some empathy for the leading character in the movies they see; it’s part of the moviegoing contract that the people we spend the most time watching are going to be people we can feel for, and often even like. But “All Day and a Night” reveals our leading man as a cold-blooded killer in the first five minutes, essentially daring us to feel anything for the guy for the next two hours.

It’s a bold move, particularly when Jahkor steadfastly refuses to explain himself to any of the other characters, or even to us in the voiceovers that run throughout the film. “People say they wanna know why, but they really don’t,” he says. “They want an easy answer.”

Also Read: Everything Is Coming Up Roses for Netflix - But Can It Last? | Podcast

One of the odd things about “All Day and a Night” is that eventually the movie itself gives us an answer, and it’s one that you might even consider easy. Another is that for all the boldness of its approach, which extends to the way the film is structured to jump around in time, it often feels leisurely rather than urgent. For an urban drama that’s full of shootings and beatings, the movie is curiously lackadaisical.

But it also has a kind of steadfast fatalism that quite deliberately undercuts much of what we see on the screen. From the opening moments, we know that Jahkor is going to murder two people and go to jail for it – so when we see him attempt to launch a career in rap or try to get out of the life of drugs and violence that trapped his father and many of his friends, we know he’s not going to succeed. Even if you want to root for him to escape, the movie tells you — and then keeps reminding you — that it’s not going to happen.

“All Day and a Night,” which premieres on Netflix on Friday, was written and directed by Joe Robert Cole, best known for co-writing “Black Panther” with Ryan Coogler and for writing and executive producing episodes of the “American Crime Story” TV series. This is only his second film as a director, after 2011’s “Amber Lake,” but it feels like the work of someone who is determined to bring a different approach to stories of inner-city life.

Like Coogler’s “Fruitvale Station,” Carlos Lopez Estrada’s “Blindspotting” and Boots Riley’s “Sorry to Bother You” among recent films, “All Day and a Night” is set in Oakland, in a community that, Jahkor says in voiceover, is home to “generations of men – brothers, uncles, cousins – all of us a part of the same story on f—ing repeat.”

In Jahkor’s house, those generations are represented by himself and his father, JD, a violent man who uses beatings to teach his son to never back down and always hit back. The young Jahkor is played by Jalyn Hall, with the hurt never leaving his eyes, while the adult Jahkor is “Moonlight” star Ashton Sanders, who does all he can to appear blank and expressionless but lets us glimpse what lies beneath.

But while Jahkor doesn’t say much to the other characters as the film bounces between the prison where he has been sent and the life he had before, he talks a lot to the audience, sharing his lessons of survival to the point where they come across as more explanation than demonstration. “Slavery taught black people to survive,” he says, “but not how to live.”

Jahkor himself obviously has trouble figuring out how to live, particularly when his girlfriend gets pregnant and he prepares for fatherhood. He’s surrounded by gangsters and doesn’t mind working for them as muscle, but he draws the line at getting involved in drugs, which sent his father on the road to destruction; he tries to get a sales job but is subject to daily indignities and suspicion – what he calls “a million tiny cuts that don’t matter until you realize you’re bleeding to death.”

Despite the blasts of violence, the film feels like a meditation on this life, and one that takes its time even as we know where it’s going. The cinematography by Jessica Lee Gagne, who recently shot episodes of “Mrs. America” and “Escape at Dannemora,” has a rich, dark look, and Sanders is compelling even when he’s passive. But it feels slow until close to the end, when it finds its voice in a string of scenes between Jahkor and JD (who is played by Jeffrey Wright, an actor who can let you glimpse the humanity behind even the hardest façade).

As Jahkor resists his father and then begins to make a tentative connection, Sanders and Wright let us feel the weight of generations — and “All Day and a Night,” which began in a blast of gunfire, ends as a sad but touching lament.