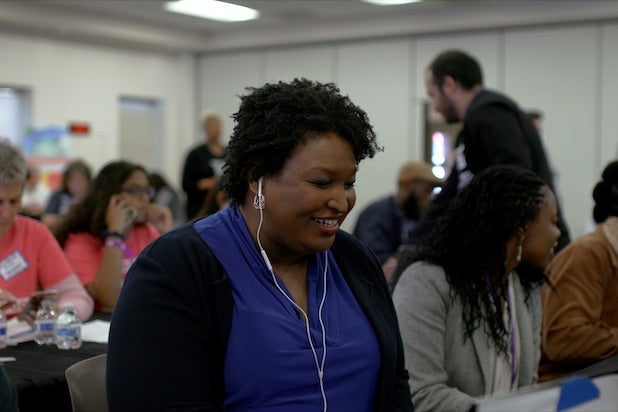 We haven’t had too many election years with quite this much attention paid to the process of voting, from allegations of voter suppression and voter fraud to President Trump’s recent suggestion that North Carolina voters cast ballots twice. But even before the act of voting became a hot-button issue in this particular election cycle, documentary filmmakers have turned their sights on the right to vote and the manipulations thereof.

Barak Goodman and Chris Durrance’s “Slay the Dragon,” which premiered at the 2019 Tribeca Film Festival and was released in April, went deep on the practice of gerrymandering. Dawn Porter’s “John Lewis: Good Trouble,” which was released by Magnolia and CNN in July, is a portrait of the late congressman that detours to explore the issues of voting rights for which he spent his lifetime crusading. And now, Lisa Cortés and Liz Garbus’ “All In: The Fight for Democracy,” which focuses on Stacey Abrams’ fight to become governor of Georgia but expands far past that to encompass nearly 200 years of every type of voter suppression.

It is the most comprehensive and far-reaching of the recent voting-rights docs, and with the election approaching it’s an uncommonly timely and urgent document of the many ways in which the foundations of democracy can be thwarted. So exhaustive that at times it’s exhausting, it’ll terrify anybody who’s worried that the true danger in this year’s election is voter suppression, not voter fraud.

(Will it change the minds of anyone who buys Trump’s line that fraud will be rampant? Probably not – like every other issue-oriented doc in these fiercely divided times, “All In” will likely be embraced by one side and ignored by the other.)

Stacey Abrams is one of the producers of the film, which is organized around her run for governor against Brian Kemp – who, as Georgia’s sitting secretary of state, also oversaw the election in which he narrowly defeated her amid numerous examples of the closing of polling places and the purging of voter rolls. And she’s one of its key talking heads, all of whom are positioned at long tables with deep rooms behind them; the settings make it look like they’re lecturing or testifying before congress, and lend an air of gravitas to what’s being said and to the people who are saying it.

Of course, the issue deserves all the gravitas it can get, and the film takes it all the way back to the election of George Washington, when only six percent of Americans — white, male property owners – were eligible to vote. From there, it delves into the 15th Amendment in 1870, which gave Black men the right to vote (women were still excluded) and led to African-American congressmen elected at state and national levels.

In the Reconstruction era that followed the Civil War, the film points out, more than two-thirds of eligible Black people registered to vote in some southern states. But after congress agreed to withdraw troops from the South to effectively end Reconstruction, the states (initially in the South, but later elsewhere) began to find ways to exclude them from the voting rolls: poll taxes, literacy tests that were designed to be almost impossible to pass, then felony disenfranchisement coupled with statues that made arrests and convictions easy.

By the end of World War II, “All In” says, registration in the South had fallen to three percent of eligible African-Americans. And organizations like the Ku Klux Klan intimidated those who were registered. For instance, Maceo Snipes, a WWII veteran, was the only Black person to vote in Taylor County, Georgia in 1946, and was shot and killed by a group of men on his front porch soon after casting his ballot.

“All In” suggests that Martin Luther King’s march over the Edmund Pettis Bridge in 1965 was a turning point, when graphic footage of Alabama police savagely beating peaceful protestors woke up Americans and spurred President Lyndon Johnson to push for and get passed the Voting Rights Act of 1965.

At this point, the film’s clear storytelling gets a little diffuse; the movie alternates between sequences featuring Abrams’ race for governor with sections from the past, but then there are time jumps within the time jumps, and a sense that “All In” really is trying to fit it all in.

And there’s a lot to fit in, notably in recent years when opponents of the Voting Rights Act seized on Barack Obama’s election as a way to undermine the act by claiming it was no longer necessary. At the same time, says author Carol Anderson, the coalition of 15 million new voters brought to the polls to vote for Obama became “the hit list for voter suppression.”

The Voting Rights Act had been extended many times over the years, and always proudly signed by Republican presidents. But behind the scenes, a strategy to constantly challenge elements of the law in court finally hit pay dirt in 2013, when the Supreme Court under Chief Justice John Roberts – whose mentor was former Chief Justice William Renquist, once one of the leaders in voter suppression in Arizona according to the film – invalidated many provisions of the bill.

In the aftermath, “the floodgates” opened to voter ID laws that made it particularly hard for minorities to be registered, as well as purges of the voting rolls, poll closures and aggressive gerrymandering.

“Intimidation from the government is real, it is powerful, it’s because of changing demographics and the fear of what this larger vote can mean,” says Anderson.

All of this is a huge amount to cover, and the film strains to do it. But even if it feels a little disorganized at times, and occasionally overwhelmed by the mass of material it’s trying to cover, “All In” leaves the unmistakable impression that there is an organized effort to prevent some citizens from voting, and that President Trump’s claims of widespread voter fraud – which his own commission could not document – is part of that effort.

It is, in the end, a damning film and a powerful one. And with Nov. 3 less than two months away, an essential one.

“All In: The Fight for Democracy” opens in theaters on Sept. 9 and on Amazon Prime Video on Sept. 18.