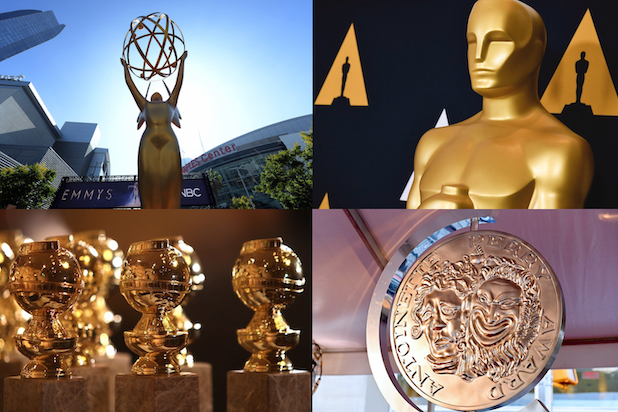 Here are all the awards shows that have been postponed or canceled or have undergone rule changes because of the coronavirus. TheWrap will continue to update this list as more announcements are made.

Academy Awards
The 93rd Academy Awards, which were originally scheduled to have taken place on Feb. 28, 2021, has been delayed until April 25, the latest date for an Oscar show since 1932. The eligibility period for films to qualify has also been extended to Feb. 28, making this the first time since 1934 that the Oscars did not honor the achievements of a single calendar year.

Nominations will be announced on March 15.

In addition, the Academy’s Board of Governors has temporarily changed the qualifying rules to allow films whose theatrical releases were canceled to remain eligible for Oscars even if they premiere via streaming or VOD. The rule will be in effect until theaters in Los Angeles reopen.

To make it easier for films to qualify, the Academy has also changed the rule that stipulates a seven-day theatrical run in Los Angeles County to allow for qualifying runs in New York, Chicago, Atlanta, Miami and the San Francisco Bay Area. And it will allow films that have premiered on a canceled film festival’s online platform to retain their eligibility as well.

It also changed the eligibility rules for documentaries, making it possible to qualify simply by winning select film-festival awards or by being chosen for two festivals from a list of nine, whether or not those festivals take place.

The Governors Awards, a fall event at which Honorary Academy Awards are handed out, will not be held this year.

Academy of Country Music Awards
The 55th ACM Awards has been pushed back for five months and is now scheduled to take place on Wednesday, Sept. 16. It was originally set for April 5 in Las Vegas — but to minimize travel for members of the country music community, it has been moved to Nashville, where it will take place in the Grand Ole Opry House, the Ryman Auditorium and the Bluebird Cafe.

Nominations have already been announced.

BAFTA (EE British Academy Film Awards)
Immediately after the Academy moved the date of the Oscars to April 25, the British Academy of Film and Television Arts moved its own awards show to April 11. It also extended eligibility to films that had their commercial theatrical release curtailed by theater closings; films that premiered on VOD in lieu of canceled theatrical openings; and films that premiered on VOD but re-open theatrically after theaters reopen.

It also said that it will announce the Film 2020-21 eligibility period, within which films must be released to qualify for the awards, in the autumn of 2020.

Cannes Film Festival Awards
The Palme d’Or, the most prestigious award in international film, will not be given out this year. While the Cannes Film Festival announced of a “Cannes 2020” lineup of films that would have been booked for the festival in early June, it is not holding a physical event and will not convene the jury that would have been headed by Spike Lee. It will still work to promote the “Cannes 2020” films through other festivals and theatrical events, but no awards will be handed out.

CAS Awards
The Cinema Audio Society has pushed its schedule into April to match the Oscars timetable, and also extended eligibility for feature films to Feb. 28 rather than restricting it to the calendar year. Under the new schedule, CAS nominations will be announced on March 2, final voting will take place between March 25 and April 6, and the CAS Awards will take place on April 17.

Cinema Eye Honors
The New York-based organization established to honor all facets of nonfiction filmmaking has changed its eligibility rules for nonfiction features and shorts. In the past, one of the ways for a film to qualify was to screen at two out of 49 specific international film festivals. This year, the requirement was eased so that any film selected for any one of those festivals is eligible, whether or not the festival actually takes place.

Cinema Eye is also opening submissions for its broadcast awards in April, earlier than usual, to give its judging committees access to the work as soon as possible.
The show itself remains on schedule for January 2021.

Also Read: 5 Ways the Oscar Season Could Be Rocked by the Coronavirus

CMT Music Awards
The country music show has been moved to Oct. 14 from its original June 3 date. It will still take place in Nashville.

Critics’ Choice Real TV Awards
The Critics’ Choice Association and the producers organization NPACT have changed the timeline of the awards show devoted to nonfiction and reality television. Submissions will now be accepted through May 15 instead of the original deadline of April 13, with nominations announced on June 8 instead of May 4.

The organizations plans to announce the winners on June 29, pushed back from June 7, “with the final event format still to be determined.”

Directors Guild Awards
In April, the DGA’s national board voted unanimously to allow films that had scheduled but lost theatrical releases to qualify in the Theatrical Feature Film, First-Time Feature Film and Documentary categories.

Drama Desk Awards
The Drama Desk organization, which gives out awards honoring theater, revised the end date of its eligibility season to March 11, when Broadway shows all closed. It went ahead with the announcement of nominations on April 11 and winners on May 31, but the awards ceremony was replaced by an announcement on Spectrum News NY1’s On Stage that also streamed live on NY1.com and DramaDeskAwards.com.

In addition, the “hanging episodes” rule has been changed to allow individual episodes of a program that fall outside the June 1 – May 31 eligibility year to qualify if they are broadcast or posted on an accessible platform by June 30.

All “For Your Consideration” events – screenings, Q&As, receptions and the like, whether live or streaming – have been suspended for the entire season.

Emmy Awards: Daytime Emmy Awards, Sports Emmy Awards, News & Documentary Emmy Awards, Technology & Engineering Emmy Awards
All four of these awards shows, which are presented by the National Academy of Television Arts and Sciences, will be replaced by virtual ceremonies that make use of remote video production. The Technology & Engineering Emmys were scheduled for April 19 in Las Vegas, the Sports Emmys for April 28 in New York City, the Daytime Emmys for June 12-14 in Pasadena and the News & Documentary Emmy Awards for September in New York. Some Daytime Emmy winners will now be announced on Friday, June 26 in a two-hour CBS broadcast,  but new dates have yet to be selected for the other shows.

Emmy Awards: New York Emmy Awards
One of many regional Emmy shows that falls under the jurisdiction of NATAS, the New York Emmys was held on April 25 but took place online and was live-streamed at the New York Emmy Awards website and on Facebook Live. Presenters were pre-taped at various locations around New York City as they opened the sealed envelopes in 137 categories, and winners were encouraged to post their acceptance speeches on social media.

Film Independent Spirit Awards
To retain its usual spot on the Saturday before the Oscars, the Spirit Awards has changed its 2021 date from Feb. 27 to April 24. It has also altered its eligibility period, which normally ends on Dec. 31 but will be extended to Feb. 28.

The Spirit Awards was the first major awards show to change its qualifying rules to reflect the cancellation of film festivals and theatrical runs. It allowed films that had been selected for three qualifying festivals that were cancelled or postponed – SXSW, New Directors/New Films and Tribeca – to qualify even if those festivals did not take place.

Golden Globe Awards
The 2021 Golden Globes will take place not on its usual early-January date, but on Feb. 28, which had been the original date for this year’s Oscars.

In late March, the Hollywood Foreign Press Association suspended the rule that films must be screened for HFPA members in a Los Angeles theater to qualify for the Globes. Instead, they can now provide members with screening links or DVDs. It also suspended the rule that films must screen theatrically or on pay-per-view for seven days in Los Angeles for films that had such a release planned between March 15 and April 30.

The rule suspensions were initially due to end on April 30, but on April 28 the HFPA said it was extending them “until a date to be determined by HFPA when cinemas in the Los Angeles area have generally reopened.”

Golden Raspberry Awards
The 40th annual Razzie Awards were the “lockdown edition,” switching at the last minute from a March 14 live ceremony to a video presentation.

IDA Documentary Awards
The International Documentary Association is working on plans that will allow filmmakers as much flexibility as possible due to the uncertainty of film festival and theatrical releases. It also plans to offer fee reductions or waivers in case of financial hardship.

iHeart Radio Music Awards
The annual show was set for March 29 at the Shrine Auditorium in Los Angeles, but was postponed two weeks prior to that date. A new date has not been set.

Kids Choice Awards
Nickelodeon’s show was to have taken place on March 22 at the Forum in Inglewood, California, but was postponed. No new date has been announced.

Olivier Awards
The London theater awards were canceled a little more than two weeks before their April 5 date. A broadcast of highlights from past shows aired in their place. This year’s winners will be revealed in a special event likely to take place in the fall.

Producers Guild Awards
In May, the PGA announced that eligibility for its Darryl F. Zanuck Award for Outstanding Producer of Theatrical Motion Pictures would be opened to films that had scheduled theatrical releases, but moved to streaming releases because of theater closings.

Pulitzer Prize
The annual announcement of winners in journalism and the arts was originally set for April 20 but was postponed until May 4, because many journalists on the Pulitzer Prize Board are busy covering the coronavirus. The awards luncheon has been postponed from May to an undisclosed date in the fall.

Screen Actors Guild Awards
The 27th annual SAG Awards have been scheduled for March 14, 2021, almost two months later than when it normally takes place. Its nominations will be announced on Feb. 4 rather than the usual early-December date.

SAG also extended its eligibility period for two months, as the Oscars did. Films and television programs will be eligible for awards if they premiered any time between Jan. 1, 2020 and Feb. 28, 2021.

Tony Awards
The Tony ceremony, which was scheduled to take place on June 7 at Radio City Music Hall in New York City, was postponed indefinitely by the Broadway League on March 25, two weeks after all Broadway theaters were ordered closed by New York Governor Andrew Cuomo. A statement said the show will take place “when it is safe to do so.”

Webby Awards
The 24th annual Webby Awards ceremony was changed from a live event to what Webby organizers called”an online celebration” dubbed “Webbys From Home.” The nominations were announced on April 28, and the winners revealed on May 19, with a special “internet celebration” taking place later in the day.

All the Movies Suspended or Delayed Due to Coronavirus Pandemic (Updating)

As the coronavirus continues to spread, an increasing number of movies are delaying or suspending production. As the number of impacted movies grows, TheWrap felt it would be most informative to keep a running list.