Around the time that a teenage Cameron Crowe was starting to write about rock ‘n’ roll, the odd hybrid known as the rock musical was being invented with shows like “Hair” and “Jesus Christ Superstar.” So it makes sense, perhaps, that the movie about Crowe’s first foray into rock journalism, 2000’s “Almost Famous,” has itself now made the transition to the stage.

“Almost Famous,” the musical, opened last week at the Old Globe in San Diego, the city where Crowe lived when he first began his writing career. Its run has been extended through Oct. 27, though it appears to be on a fast track to a Broadway premiere in 2020.

Reviews for “Almost Famous” have for the most part been raves, and I’m not going to offer my own critical assessment of the production — that’s a task better left to somebody who hasn’t been friendly with Crowe for about 40 years. But there are enough devotees of the film out there, and enough curiosity about how it has made the transition from screen to stage, that it seems worthwhile to pose and answer some questions that curious fans of the movie might have.

How close is the musical to the movie?
That depends on what you mean by close. It tells the same story: Aspiring writer William Miller (played on stage by Casey Likes), whose mother doesn’t want rock ‘n’ roll in the house, begins writing about rock with encouragement from legendary rock critic Lester Bangs (Rob Colletti). He gets an assignment from Rolling Stone magazine to profile a rising band called Stillwater, meets a groupie named Penny Lane (Solea Pfeiffer) and has various misadventures on the road with the band and with Penny and her group of music-loving women who call themselves “Band Aids.”

The action is streamlined and rearranged a bit, but the musical’s plot, which was based on Crowe’s real-life adventures as a teenage rock writer, remain true to the film’s. And many of the lines in the stage show are taken directly from his Oscar-winning screenplay.

So what’s different?
The form. By that I mean not just the transition from screen to stage, but also the transition into a full-fledged musical, where characters break into song to convey their hopes and dreams and to drive the story line. William Miller, for example, doesn’t tell Lester Bangs about his conflicts with his mother — he sings about them in a big opening number, “1973,” and he and the other characters continue singing through 18 newly-written songs (plus four reprises) from Tom Kitt (music) and Crowe (lyrics).

Among rock-themed movies that have been turned into Broadway shows, does that make “Almost Famous” closer to “School of Rock” than to the Tony-winning “Once?”
Yes, in a way. In the film version of “School of Rock,” the characters mostly played existing rock songs, but the musical was based around new songs that served much the same purpose that the songs do in “Almost Famous.”

The songs in the stage version of “Once,” by contrast, kept largely to the same model as the movie: The characters were musicians, and for the most part we heard them sing and play only when they were doing so as part of their jobs. The actors who play the members of Stillwater do some of that in “Almost Famous,” but it is not the focus of the musical. 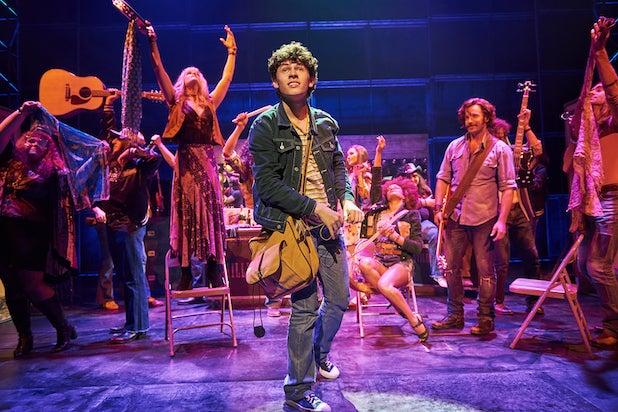 “Almost Famous,” the movie, was steeped in music, with the rock songs of the era playing throughout the film. Are those songs in the stage version?
There are 17 songs on the “Almost Famous” movie soundtrack album, only four of which are in the stage show. (Those are Stillwater’s “Fever Dog,” Lynyrd Skynyrd’s “Simple Man,” Cat Stevens’ “The Wind” and, of course, Elton John’s “Tiny Dancer.”)

More than three dozen additional songs show up in the film but not on the soundtrack album. Two of those, performed in the film by Stillwater, are in the stage production. One additional song by a major artist that appeared briefly in the film is used to great effect in the musical, but I don’t want to spoil anything by saying which one that is.

Also, several other songs that weren’t in the movie have been added to the stage version, including Led Zeppelin’s “Ramble On” and “Whole Lotta Love,” Deep Purple’s “Highway Star” and David Bowie’s “Jean Genie” and “It Ain’t Easy.” And if you listen closely, you’ll catch snippets of other rockers: a bit of Jimi Hendrix here, a riff from Bruce Springsteen there …

Are we hearing the original recordings of any of those songs?
No. “Tiny Dancer” is sung by the entire cast, “The Wind” by Pfeiffer, “Simple Man” by Drew Gehling (Jeff Bebe), etc.

The movie is filled with “needle drops,” where we hear the versions of these songs that the characters would have heard. In the stage version, with its classic musical form, the music we hear is always being performed by the people we’re watching on the stage. And the majority of it consists of original songs that advance the plot.

But does the musical do justice to the scene where band divisions are healed by a tour-bus singalong to Elton John’s “Tiny Dancer?”
Oh, the creative team is fully aware of how much that scene means to people who love the film. It gives that song a crucial spot in the show, finds a slightly different way to stage it (William and Penny are sitting on the other side of the bus!) and manages to retain its potency as an emotional highlight. 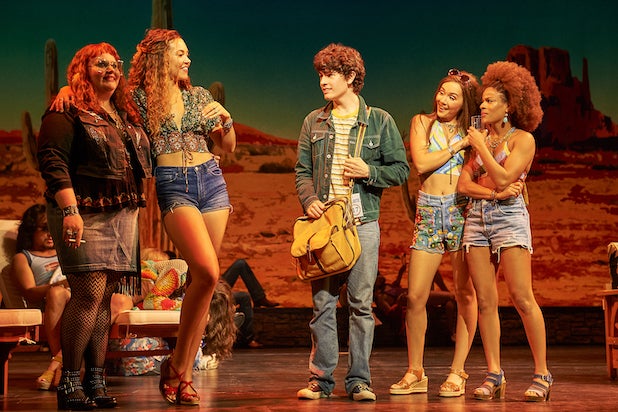 How does the show deal with the aspects of “Almost Famous” that might be considered problematic in 2019?
Obviously, there are potentially troublesome sides to a film whose heroine is an underage girl who sleeps with rock stars, and whose central character is a 15-year-old boy who loses his virginity to a group of Band Aids. Crowe and his collaborators obviously know that.

The play eliminates the movie’s conversation in which we learn that Penny Lane is most likely 16, and Penny looks old enough that it’s easy to accept her as an adult if you’d like. (Pfeiffer is 25, about five years older than Kate Hudson was when she played the role on screen.)

Also changed is the scene in which Penny overdoses on Quaaludes and William declares his love for her and kisses her when she’s barely conscious: The kiss is missing, whatever happens is consensual and it ends up being tender and touching.

On the other hand, the scene in which William is deflowered by his new Band Aid pals gets a full-on production number in place of the film’s gauzy fade-out, as if to say that these things happened in 1973 and that’s that.

Do the changes have a substantial effect on the feeling or tone?
No. This is definitely “Almost Famous,” which is to say it’s an affectionate, uncynical valentine to a bygone era in rock ‘n’ roll, and to Crowe’s teenage years. It doesn’t really look or sound the same the same as the movie, but it feels the same.