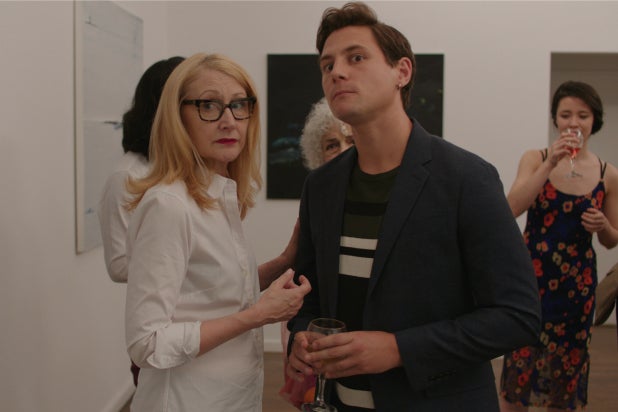 “Almost Love” (which screened at festivals under the title “Sell By”) is the first narrative feature written and directed by actor Mike Doyle, best known for playing forensics tech Ryan O’Halloran on “Law & Order: Special Victims Unit” from 2002 to 2009. This is an ensemble movie, and Doyle makes the common mistake of first-time writer-directors of cramming far too many characters into his story.

“Almost Love” is one of those ultra-mild movies that is reliant almost entirely on the likability of its large cast, which includes Scott Evans and Augustus Prew (who recently co-starred in the Hulu horror movie “Midnight Kiss”) as the central couple, Adam and Marklin. Adam is a visual artist who pays the bills by working on canvasses for art star Ravella Brewer, who is played in an all-too-brief cameo by Patricia Clarkson.

Marklin operates some kind of fashion site that is so well known and influential that he gets stopped in nearly every scene by someone who recognizes him and wants a selfie or wants to praise his site in some way. And so Marklin has the kind of fame that feels like it might come to an actor on a well-known TV show, not the owner of a fashion website. Marklin has somehow gotten a profile in the New Yorker, but that still doesn’t explain why everyone in Manhattan seems to know and love him.

Also Read: 'Sharp Objects': Patricia Clarkson Knows You Love Adora - and She's Trying Not to Judge You for It

Adam and Marklin have been together for a few years. They are in couples counseling and Adam wants to have sex more often than Marklin does. Evans and Prew work hard in their scenes to seem like a couple, but they often look as if they’ve just met and they do not have any chemistry. As “Almost Love” goes on, it begins to feel as if the point is that their characters don’t have chemistry either, and this is even made clear in some crucial dialogue that Adam overhears while he is in the hospital, and Marklin is at the same hospital taking care of an older man behind Adam’s back. If all of that sounds very labored, that’s because it is.

Long stretches of “Almost Love” are devoted to three other couples. Good-natured Cammy (Michelle Buteau, “Always Be My Maybe”) is dating Henry (Colin Donnell, “Arrow”), a bearded guy who confesses that he is staying at a homeless shelter. Cammy discusses this at length with her friend Haley (Zoe Chao, “Downhill”), who is falling for her 17-year-old student Scott James (Christopher Gray, TV’s “The Mist”).

Elizabeth (Kate Walsh) is having doubts about her marriage to Damon (Chaz Lamar Shepherd, “Luke Cage”) after 15 years, but she and her husband get so little screen time that they might as well not be in this movie. There are many other characters who really might as well not be in “Almost Love,” including a hunky ice-cream-truck vendor who shows up at the gym where Adam swims and then helps him to a hospital after Adam drunkenly breaks into his truck.

About halfway through the movie, we get to go to Ravella Brewer’s art opening. Clarkson, as is her wont, has a whole characterization going for this briefly glimpsed character. “Sometimes the simplest brushstrokes are the most complicated,” Ravella muses to her fans, and Clarkson touches her face on this line as if to convey this woman’s false humility. She also manages to signal, “I can’t believe how I can just toss off something so profound,” and also, “Something this profound needs to be just tossed off.”

The problem with this virtuosity from Clarkson is that she has such authority that it becomes a movie about Ravella Brewer for a few minutes, and then we never see Ravella Brewer again. You can’t ask an actor of her caliber to just show up and then disappear without upsetting the balance of an already unwieldy and badly structured narrative.