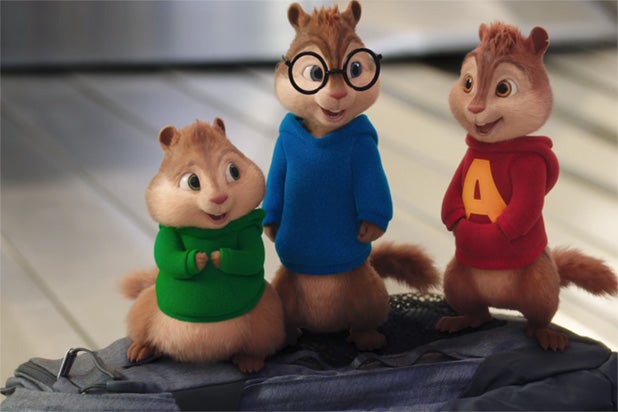 They say the more the merrier, but in the case of “Alvin and the Chipmunks: The Road Chip,” four may simply be too many.

Critics are pretty much in unison when it comes to their reviews about the fourth  edition in the franchise. With the film currently holding a score of 14 percent on Rotten Tomatoes, reviewers have noted that “there really doesn’t seem to be any reason for this listless Chipmunks installment,” and that parents escorting kids to the live-action comedy “have our sympathies.”

And many have also complained that this installment, starring Justin Long, Matthew Gray Gubler, Jesse McCartney, Tony Hale, Bella Thorne and Jason Lee, seems little more than a “cash grab,” and TheWrap’s Inkoo Kang agreed in her review titled, “Sequel Runs Out of Steam Before Its Destination.”

Also Read: 'Alvin and the Chipmunks: The Road Chip' Review: Sequel Runs Out of Steam Before Its Destination

“‘The Road Chip’ is so full of unconvincing simulations of emotions that you may temporarily forget what feelings feel like,” wrote Kang. “Numbness or irritation — pick your poison. If there’s another reaction that this cash grab is supposed to elicit, I certainly didn’t experience it.”

“Alvin and the Chipmunks: The Road Chip,” opened Friday. See the worst reviews below.

“The following is a public-service announcement. WARNING! Exposure to ‘Alvin and the Chipmunks: The Road Chip’ may result in the dislocation of eyeballs in viewers over the age of 7 due to uncontrollable rolling of the eyes at the sight of the idiotic antics committed on screen. To avoid eye strain, which is to say, eye sprain, avoid this movie at all costs.

“To the parents of kids clamoring to see the picture, you have our sympathies. You have been warned. Yes, Alvin, Theodore and Simon — half-pint helium-voiced heroes of the three past ‘Chipmunk’ movies — are back for another cash grab.”

See Video: Alvin and the Chipmunks Face Off Against Tony Hale in New 'Road Chip' Trailer

“‘The Road Chip’ is basically an overlong metaphor for the beauty of blended families. (Does it matter that the Chipmunks are not real children? Only in a court of law.) The movie does nothing special or surprising, but it doesn’t particularly offend, either. Grown-ups may impatiently tap their feet and roll their eyes at the rote storytelling, but it’s not the worst way to spend an afternoon with the kids.”

“‘Alvin and the Chipmunks: The Road Chip’ was made by a director, two screenwriters, two producers and five production companies. Judging by the jarringly muddled finished product, it seems doubtful any two of them were ever in the same room at the same time. At this point, four movies into a re-imagining that started in 2007, there’s no need to deviate from the lazy but lucrative formula. There’s a completely contrived conflict caused by the ineptitude of the protagonists (check), a bad guy who acts without logic in service of the plot (check), a chipmunk version of ‘Baby Got Back’ (check) … The best thing you can say about ‘The Road Chip': Although there is a joke involving chipmunk poop, at least nobody consumes it this time.”

“As it stands, there really doesn’t seem to be any reason for this listless ‘Chipmunks’ installment — the fourth in their continuing big-screen revival, if you’re counting. There’s no curiosity value in seeing them dropped into live-action (or hoodies) anymore. There’s not much of a story, either. The movie barely does enough with its trusty road-movie setup to justify the cutesy title.”

“Now would be an excellent time for parents of young children to invest in earplugs.”

“The fourth Chipmunk outing offers broad slapstick for kids and an endurance test for their parents.”

“‘Alvin and the Chipmunks: The Road Chip’ has sporadic laughs for the under-10 set and absolutely nothing for the poor parents sitting next to them. I would like to have added that the film is wholly forgettable, but these images are scorched on my retinas, and I will forever twitch when someone nearby screams that fateful cry: ‘Alvin!'”