It’s been 10 years since “The Hunger Games” first hit theaters, and fans had to watch Rue die in live action. But, during San Diego Comic-Con, Amandla Stenberg offered forgiveness to her fictional killer – and Jack Quaid couldn’t have been happier.

Stenberg and Quaid starred in the film as Rue and Marvel, respectively, and their characters certainly weren’t allies. In fact, it ended up being Quaid’s character who killed Rue, by throwing a spear directly into her torso. Jennifer Lawrence’s Katniss Everdeen quickly got revenge by immediately shooting him chest with an arrow – but still, fans were pretty devastated by his actions. Over the years, Quaid has poked fun at the situation, even publicly apologizing for it in 2021.

So, during Comic-Con, Stenberg forgave him. Both actors joined E! News in their on-site studio, promoting their respective projects. When Quaid hopped in with his “Star Trek: Lower Decks” co-stars, he was presented with a video message from Stenberg, which you can watch below.

“Oh Jack,” Stenberg started, prompting Quaid to freak out as he realized who he was getting a message from. “It’s been so many years. And it’s taken me time to recover – sometimes I still get a jabbing pain through my abdomen, and I’m reminded of the time that you murdered me. But we all have our faults. And I forgive you.”

“Yes!” Quaid exclaimed, jumping out of his seat in celebration. “Yes! Thank you Amandla. Oh my god, people were spitting on me in the streets for years.”

Quaid then played things up even further, appearing to get emotional and encouraging his co-stars to continue the discussion around him as he recovered. 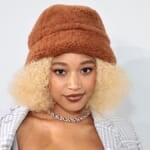