While Amazon’s upcoming “Lord of the Rings” series was born out of Jeff Bezos’ desire to find “the next ‘Game of Thrones,’” fans of J.R.R. Tolkien’s books can rest assured that this new series won’t be following in the HBO drama’s footsteps when it comes to sex and violence.

Some Tolkein fans were rankled last summer when news broke that the show – formally titled “The Lord of the Rings: The Rings of Power” – had hired an intimacy coordinator. This seemed to suggest a level of nudity and/or sex that isn’t prevalent in Tolkien’s source material, and caused fans to worry that Amazon would be straying from the books.

But showrunners J.D. Payne and Patrick McKay revealed in a new Vanity Fair profile on the show that the series is not aiming for an R-rated audience. McKay said in the piece that the series is intended to be “for everyone, for kids who are 11, 12, and 13, even though sometimes they might have to pull the blanket up over their eyes if it’s a little too scary. We talked about the tone in Tolkien’s books. This is material that is sometimes scary — and sometimes very intense, sometimes quite political, sometimes quite sophisticated — but it’s also heartwarming and life-affirming and optimistic. It’s about friendship and it’s about brotherhood and underdogs overcoming great darkness.” 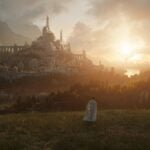 Also Read:
Amazon’s ‘Lord of the Rings’ TV Series Gets a Title (Video)

So, in short, “The Lord of the Rings” TV series will not be embracing the TV-MA nature of “Game of Thrones.”

The series is technically a prequel to the story told in “The Lord of the Rings” and is set in the Second Age, thousands of years before the events of “The Lord of the Rings” occur. And while the show is based on Tolkien’s writings in the Appendices, there are also new characters introduced who further flesh out the world of Middle-earth in addition to near-immortal fan-favorite characters like Galadriel and Elrond – albeit significantly younger and less sophisticated versions than the ones we saw in Peter Jackson’s “Lord of the Rings” or “Hobbit” films.

All will be revealed when “The Lord of the Rings: The Rings of Power” debuts on Amazon Prime Video on September 2.