Amazon has pegged MGM’s video content library of movies and TV, which includes classics from the James Bond and Rocky franchises, as well as titles like “The Silence of the Lambs” and “The Handmaid’s Tale,” at $3.4 billion in value.

That $3.4 billion, which was disclosed in a 10-Q SEC filing on Friday following the company’s earnings report, in estimated value encompasses roughly 4,000 film titles and 17,000 episodes of TV. It’s the first filing to discuss any information about MGM’s perceived value to Amazon.

Amazon acquired MGM for $8.5 billion in a deal that closed in March, and it further justified its acquisition price by noting that it includes roughly “4.9 billion of goodwill,” which is a term that generally encompasses other intangible assets, in this case the 100-year-old brand name of MGM, its existing talent relationships and other untapped IP that the studio holds, the Bond franchise partially among them. 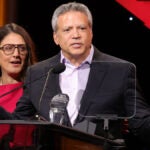 The filing also breaks down some of the details of the MGM acquisition, saying that it paid $6.1 billion in cash and also immediately paid off $2.5 billion in debt after the acquisition closed. It also said however that because of the limited time since the acquisition, its overall valuation of the assets is “preliminary and subject to change.”

Amazon briefly noted the MGM acquisition during its earnings call on Thursday, saying that the library will “create even more opportunities to deliver quality storytelling to customers.”