Well, it appears as if those reports that “Amelia” was actually a terrific movie that wasn’t being screened only because it wasn’t completely ready were nothing but studio spin.

And it turns out that everybody’s initial hunch, the one that said there must be a reason why Fox Searchlight wasn’t showing the film to critics until the last minute, was pretty accurate after all.

Director Mira Nair’s movie about the pioneering aviatrix now sits at a dismal 16 percent positive reviews on Rotten Tomatoes, and a completely pathetic 11 percent among top critics. Over at Metacritic, its score goes up to a deeply mediocre 37 percent. 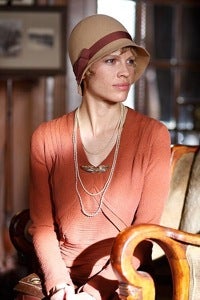 Certainly, movies have won Oscar attention while being savaged by the critics in the past. (“Crash,” anyone? “The Reader?”) But let’s face it: nothing gets a best-pic nomination with a Rotten Tomatoes score in the teens.

And in what might be one of the worst signs yet for the film’s awards chances, it screened Saturday afternoon at the Academy’s Samuel Goldwyn Theater to a sparse audience of AMPAS voters.

According to estimates from audience members, no more than 35 percent of the theater was filled for the screening – which means, if members brought guests, that fewer than 200 voters came to the film’s only pre-nomination screening on Academy turf.

And while I hear that the response was generally positive (it usually is; the Goldwyn draws an appreciative audience), that reaction was also described to me as “not overly enthusiastic.”

For “Amelia” to counter those negative reviews, it would have needed to wow Oscar voters. For the movie to survive its decent but unspectacular boxoffice showing, it would have been necessary to draw a good crowd to the theater that, after all, usually attracts exactly the audience “Amelia” has to win over: upscale, older, more conservative and more attuned to the kind of old-fashioned filmmaking that Nair’s biopic represents.

It didn’t do either of these things. It drew a smallish audience, and it played decently.

Add it all up, and what you’re left with is more than just a truckload of questionable puns about a movie that can’t get off the ground, or is lost at sea.

The follow-up question: can Hilary Swank survive the movie’s failure with her best-actress chances intact? Given the fact that her own reviews have been lukewarm, and her accent has been mocked, I’d say no.

Sure, it still has a shot in some categories (costume design comes to mind). Sure, I suppose it could stage a miraculous rally … maybe.

But c’mon, that won’t happen. It’s over.