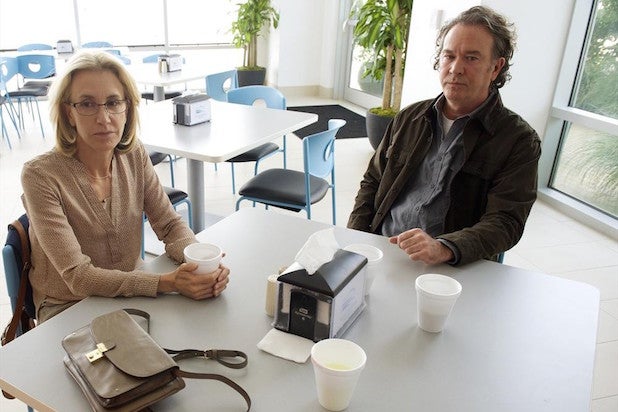 On the surface, a murder is a crime that involves a perpetrator and a victim. But the minute race, class and gender enter the mix, this criminal act becomes so much more.

The intersection between all these dynamics and how they are handled within the justice system is just one of the deconstructed themes on ABC’s intelligent, probing and fearless new series “American Crime,” which debuts Thursday.

Created and executive produced by Oscar winner John Ridley of “12 Years a Slave” fame, the drama deftly challenges viewers to examine how we as Americans emotionally process race and crime while setting up a murder mystery devoid of easy answers and motivations. If the movie “Crash” and the board game Scruples had a baby, it would be “American Crime.”

The story begins when Matt, a war veteran, is brutally killed and his one-time beauty queen wife Gwen is viciously attacked within inches of her life. Police reach out to the man’s father Russ (a painfully relatable Timothy Hutton) and mother Barb (Felicity Huffman with sobering brown contacts) and the narrative unfolds.

Russ, who was estranged from his son Matt for years, deeply mourns the death and desperately seeks the truth no matter how unfavorable and ugly. Barb, on the other hand, is blinded by loss and rage and wastes no time turning her child into a martyr as she fashions a clumsy crusade filled with racist and classist presumptions.

Meanwhile, Gwen’s mom (Penelope Ann Miller) and dad (W. Earl Brown, “There’s Something About Mary”) feebly try to keep their privacy and sanity in tact amid growing media and public interest. For instance, they refuse to play up the fact that their deceased son-in-law and comatose daughter are white and the suspects are black and Latino. But Barb has other plans.

On the other side of the aisle are boyfriend and girlfriend Carter (Elvis Nolasco) and Aubrey (Caitlin Gerard). He’s black, she’s white and they’re both addicted to love and meth. Making matters more complicated, Carter is the main suspect in Matt’s murder but as the story unfolds, his guilt becomes less of a certainty.

Regina King (“Southland” and “Ray”) heats things up on Episode 3 with another spellbinding performance. This time around, she plays Carter’s militant, Nation of Islam leaning sister Aaliyah — a woman more concerned with the cultural implications of Carter’s case than his actual innocence.

Carter isn’t the only one on trial. Richard Cabral costars as Hector, an excessively tattooed gang member in nefarious possession of the dead man’s credit cards. Johnny Ortiz plays Tony, the naive and sheltered teenager who rebelliously rents out his father’s car to Hector. And Benito Martinez (“The Shield”) plays Tony’s father Alonzo. A proud, business-owning mechanic, Alonzo looks down on Latino gangsters and illegal immigrants.

Some of the series’ most powerful moments involve Alonzo and Tony. There is one part in particular on the pilot, when the police prove less trustworthy than Alonzo imagined, that will have every viewer with a child weeping uncontrollably.

Then there is someone like Barb, who is infuriatingly bigoted in some scenes and undeniably sympathetic in others. Just as Carter is shown as menacing during one act and caring when he’s with Aubry.

These characters are anything but flawless and one-dimensional. But, they are at their most believable and compelling when they relentlessly defend their children and loved ones and awkwardly try to make sense of their crumbling worlds.

No, “American Crime” is not the Twitter catnip that Shonda Rhimes has skillfully provided on Thursday nights for months on end. Instead, this is an unflinching undertaking that is not only worth watching, but one that will inspire deep thought and dialogue long after the credits have rolled.