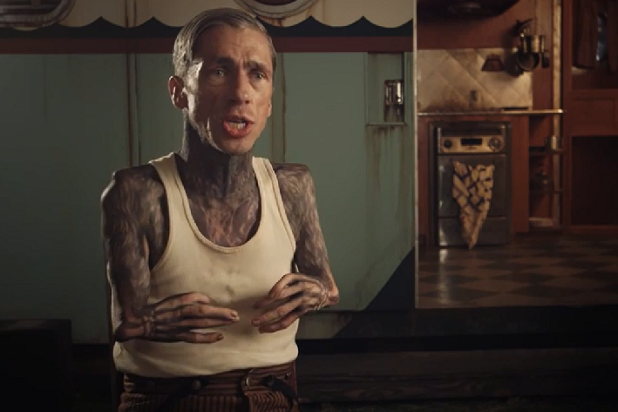 With the premiere of “American Horror Story: Freak Show” looming (mark Oct. 8 on your calendars, if you haven’t already), the FX series is taking viewers behind the scenes to introduce some of the lesser-known — and quite extraordinary — performers who will be showcased on the anthology series this season.

Fraser suffers from phocomelia — a malformation of the limbs — as the result of his mother using the morning-sickness medicine thalidomide.

“Suffers” might be the wrong word, as Fraser seems quite comfortable with his abnormality.

“Of course, these are different, and they’re interesting to look at, and there’s nothing wrong with that. I’m powerful and awesome,” Fraser, whose credits also include “Cast Offs,” says of his under-developed arms in the video. “And I have these. And I’m a freak. And I’m an actor. And I’m a freak actor, playing a freak. And it’s awesome.”

In the video, Fraser also dispels some common misconceptions about the disabled.

“For me, when you’re disabled, the two things people think you can’t do are fight and have sex,” Fraser notes. “So I’ve got a black belt, and I’m really good at shagging.”

You heard him, ladies …

“American Horror Story: Freak Show,” which returns cast members like Jessica Lange, Kathy Bates and Evan Peters, as well as introducing newcomers including Michael Chiklis, takes place in 1950s Jupiter, Fla., where the arrival of a troupe of curiosities coincides with the strange emergence of a dark, threatening entity.

Get to know Paul the Illustrated Seal — and the man behind him — by watching the video below.