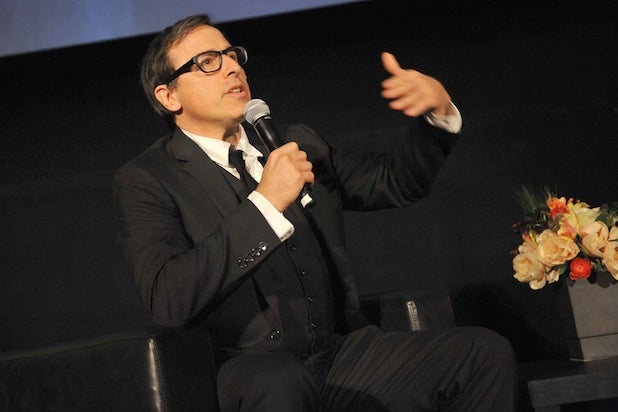 David O. Russell’s “American Hustle” is one of the last major players in this year’s awards season to be unveiled publicly, but an audience at the AFI Fest in Hollywood got a look at the first six minutes of the movie at the end of a tribute to Russell on Friday night.

And what was showcased in the opening sequence was certainly eye-catching. For starters, there was an elaborate comb-over operation so meticulously performed by Christian Bale that even Donald Trump might learn a thing or two from it.

And there was a neckline on Amy Adams‘ dress so plunging that it figures to finish the job of obliterating her good-girl image, which Russell started when he cast her as a tough-talking Boston barmaid in “The Fighter” three years ago.

And there was Bradley Cooper‘s quintessential ’70s suit, and Jeremy Renner‘s impossibly poofy coif, and a deliciously vicious war of words between Bale and Cooper, all set to the surreal cheese of the band America’s soft-rock ditty “A Horse With No Name” and the cautionary strains of Steely Dan’s foreboding “Dirty Work.”

No doubt there’s far more than wardrobe and hair to “American Hustle,” which is based on the ABSCAM sting operation that took down a number of congressmen in the early 1970s. (“Some of this actually happened,” reads a card that opens the film.)

But the opening sequence only hinted at what lies beyond, and proved both tantalizing and inconclusive. It’s funny, and the actors obviously have a lot to chew on, and the look is a hoot, and a quick cut at the beginning of a Bale voiceover teased a backstory that presumably sets up his character.

Beyond that, we’ll have to withhold judgment until Russell locks the sound and finishes the film, which producer Jon Gordon said at a pre-show reception should come in a few days.

“Hustle” stars Cooper and Jennifer Lawrence also showed up at the reception, as did Jane Fonda and “The Fighter’s” Oscar winner Melissa Leo.

The lengthy Q&A that preceded the “American Hustle” clip started about an hour late because of technical problems, but the audience remained enthusiastic toward a director who said that his last three films – “The Fighter,” “Silver Linings Playbook” and now “Hustle” – are examples of him finally hitting a groove in his work. “I feel like I’m very focused now on the kind of films I want to make,” he said.

Other notes from the Q&A:

But Russell’s best story may well have come when he told of being taken to then-Warner Bros. chief Terry Semel’s house for a fundraiser for presidential candidate George W. Bush. “Is Terry a Republican?” he asked the person who brought him to the gathering. The reply: “Terry’s an opportunist.”

At the time, Russell was in post-production on “Three Kings,” his darkly comic story of the first, truncated Gulf War, which happened during the presidency of Bush’s father. “When I met George W. Bush, I said, ‘Hi, I’m editing a film that will question your father’s legacy in Iraq,'” Russell said he told the president-to-be.

“And he immediately shot back, ‘Well, I guess I’ll have to go back there and finish the job.'”