Showtime has released the first trailer for “American Rust,” the upcoming series adaptation of the acclaimed novel by Philipp Meyer starring Jeff Daniels and Maura Tierney.

Set to premiere on Sept. 12, the series is described as a “story of survival and transcendence” centered on Del Harris (Daniels), the “complicated and compromised chief of police of a Pennsylvania Rust Belt town full of good people making bad choices,” according to Showtime. “When news of a murder rips through the town, Harris must decide what lengths he is willing to take to protect the son of the woman he love.” 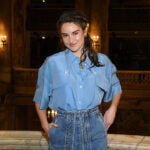 Dan Futterman is writer, executive producer and showrunner on the series, which reunites him with Daniels after previously collaborating on the Hulu limited series “The Looming Tower.”