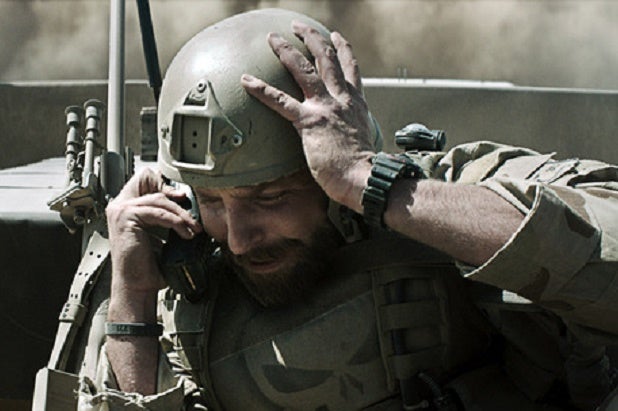 Even as “American Sniper” breaks January box-office records and revels in six Oscar nominations, criticism over the subject of the film, sharpshooter Chris Kyle, is rising and reaching into the Academy of Motion Picture of Arts and Sciences, which votes on the Academy Awards.

Over the weekend, multiple Academy members told TheWrap that they had been passing around a recent article by Dennis Jett in The New Republic that attacks the film for making a hero out of Kyle, who said: “The enemy are savages and despicably evil,” and his “only regret is that I didn’t kill more.” Kyle made the statements in his best-selling book, “American Sniper,” on which the film is based.

The film’s straightforward treatment of Kyle, who was killed in February 2013 by a veteran suffering from post-traumatic stress disorder, is one of the reasons it has been celebrated by the military and embraced by audiences that have made it by far the top-grossing Best Picture nominee. The film had a massive opening when it went wide at the box office this weekend and is poised to break an historic $100 million this holiday weekend.

But Academy members seem to be paying attention to the criticism that Eastwood and star/producer Bradley Cooper shouldn’t be celebrating a man who wrote that killing hundreds of Iraqis was “fun.”

“He seems like he may be a sociopath,” one Academy member told TheWrap, adding he had not yet seen the film but had read the article, which is being passed around.

Michael Moore, an Oscar voter and former Academy governor from the Documentary Branch, tweeted an anti-sniper comment on Sunday — “My uncle killed by sniper in WW2. We were taught snipers were cowards … Snipers aren’t heroes … ” — but said it wasn’t about “American Sniper.” On Facebook, he later praised Cooper’s performance but lamented that Eastwood “gets Vietnam and Iraq confused in his storytelling.”

Neither distributor Warner Bros. nor the filmmakers have responded to TheWrap’s request for comment, though the studio said they intended to make someone available.

A piece in The Guardian by author Lindy West criticized Kyle this way:  “The real American Sniper was a hate-filled killer. Why are simplistic patriots treating him as a hero?”

Jett quoted West in his piece in the New Republic, and added: “One answer to that question: Because many Americans are unable to accept that nothing was won in Iraq, and that the sacrifices Kyle and others made were not worth it.”

The criticism of “American Sniper” is not the first controversy over fact-based movies this Oscar season. Numerous historians, and now Maureen Dowd in The New York Times, have criticized another Best Picture nominee, “Selma,” for distorting President Lyndon B. Johnson’s record on the Voting Rights Act.

Meanwhile, the New Republic’s Jett has taken criticism for criticizing “Sniper” before seeing the film.  “I have not seen ‘American Sniper,’” he wrote. “But if the trailer is any indication, Eastwood’s film, like ‘Zero Dark Thirty,’ tries to make a straightforward situation more complex than it is.”

Jett quickly attracted scorn for dismissing a film he hadn’t seen. The Washington Free Beacon called his story “amazingly dumb” and “idiotic tripe,” while Dissolve editor Scott Tobias tweeted, “I make no great claims as an editor, but if you send me a thinkpiece on a movie and you haven’t seen the movie, it goes back for revision.”

But Jett’s piece does get to the heart of complaints about “American Sniper,” which are significantly different from the ones leveled at “Selma.” The latter film has been attacked for distorting real events; the former is attacked for having as its hero an unrepentant killer who bragged about seeing all Iraqis as “savages,” and also made some unverifiable claims that aren’t included in his book, including being recruited by the government to shoot looters from the roof of the Superdome in the aftermath of Hurricane Katrina.

Kyle was also sued by Jesse Ventura over a claim he made in his book that he decked Ventura – who Kyle didn’t identify by name in the book, but did in interviews afterwards – in a bar after the vet-turned-politician spewed anti-American sentiment. Ventura said it never happened and won the case.

Complaints that Kyle may have lied about his activities, and that he was too enthusiastic a killer, have been around since the publication of the book. But the success of the film both with Academy voters and now with the public has ramped up the criticism, even as it has brought out staunch supporters of Kyle’s.

In the Guardian piece, West wrote of the film, “If [Eastwood], intentionally or not, makes a hero out of Kyle – who, bare minimum, was a racist who took pleasure in dehumanizing and killing brown people – is he responsible for validating racism, murder, and dehumanization?”

But relying exclusively on Kyle’s viewpoint is not a weakness of the movie, wrote veteran Paul Rieckhoff in a Variety piece. He called the film “the single best work of film about the Iraq War ever made,” said Kyle was a “real-life super hero” and then admitted, “‘American Sniper’ does not … much address the overall complexity of the larger political issues surrounding the war — or the complexity of the Iraqi side of the experience. And that’s OK. Kyle, much like many I served with, and our president himself during most of the Iraq War, held a very black-and-white view of the conflict. We were right, they were wrong …

“It was not the war I saw during my time as an infantry platoon leader in Baghdad, and not the war many others saw overflowing with spectrums of gray. But it was the war Chris Kyle and many others saw. This is a real and important perspective that must be explored and showcased in order to truly understand the broader American experience of the Iraq War.”

In The Intercept, though, Peter Maass suggested that being true to one man’s experience is not enough. “There’s a dilemma at work: a war movie that is true of one American’s experience can be utterly false to the experience of millions of Iraqis and to the historical record,” he wrote. “Further, it’s no act of patriotism to celebrate, without context or discussion, a grunt’s view that the people killed in Iraq were animals deserving their six-feet-under fate.”

For audiences, the complaints hardly matter, as tweets like this one from military wife Holly Fisher attest: “#AmericanSniper‪ on 3 screens in my hometown tonight; all sold out. Ignorant reviews from whiny, ungrateful Hollywood libs are meaningless.”

But the way in which the film has been celebrated, and the spread of naysayers, could have an impact. As Grantland’s Mark Harris tweeted, “’American Sniper’s’ huge opening being touted as a triumph for conservatives is, I think, where its Oscar story ends.”