The first look at “American Underdog” arrived on Wednesday, giving us a glimpse of Zachary Levi’s portrayal of the NFL Hall of Fame quarterback.

The biopic follows Warner’s humble roots stocking supermarket shelves to his rise as a Super Bowl MVP. In the new behind-the-scenes video, Warner, who serves as an executive producer on the film, shared why he thinks his story is made for the big screen.

“I’ve heard so many people over the years say that they’ve been inspired, they’ve been encouraged because of my story,” he explained. “That’s what I think is so cool.” 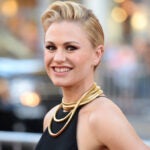 “Shazam!” star Levi, who plays Warner, said he was very familiar with the athlete’s success story before taking on the role.

“Everybody knew the story. He was working at a supermarket, and then plays arena football, then gets in the NFL, he wins the freaking Superbowl,” Levi said, adding, “We’re all in some journey in our lives. I think that that’s incredibly relatable.”

The Lionsgate film also stars Anna Paquin as Warner’s wife, Brenda, who says in one tender scene, “You go out there and you show the world what I’ve known all along.”

Warner shared the new video on Twitter Wednesday morning, writing, “Destiny belongs to the underdogs” — a line spoken by Dennis Quaid, who plays Warner’s coach Dick Vermeil, at the end of the clip. See that tweet below, and watch the full behind-the-scenes video up top.