“America’s Got Talent” contestant Jane Marczewski, who performs under the stage name Nightbirde, has dropped out of the competition due to her ongoing battle with cancer.

“Important Announcement!!” Marczewski wrote in a Facebook post on Monday. “Since my audition, my health has taken a turn for the worse and the fight with cancer is demanding all of my energy and attention. I am so sad to announce that I won’t be able to continue forward on this season of AGT.”

Marczewski first appeared on the June 8 episode of the current 16th season of the NBC competition series. Her performance of her original song “I’m Okay” wowed the judges, earning her a Golden Buzzer from an emotional Simon Cowell. 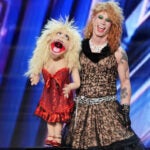 In introducing her audition, Marczewski said she had “some cancer in my lungs and my spine and my liver.”

“It’s important that everyone knows that I’m so much more than the bad things that happen to me,” she told the judges. “You can’t wait until life isn’t hard anymore before you decide to be happy.”

Howie Mandel called the song “the most authentic thing I’ve heard this season,” while Sofia Vergara called it “powerful” and “heartfelt.”

“Life doesn’t always give breaks to those that deserve it-but we knew that already,” Marczewski wrote in her post on Monday. “Thank you for all your support, it means the world to me. Stay with me, I’|l be better soon. I’m planning my future, not my legacy. Pretty beat up, but I’ve still got dreams.”