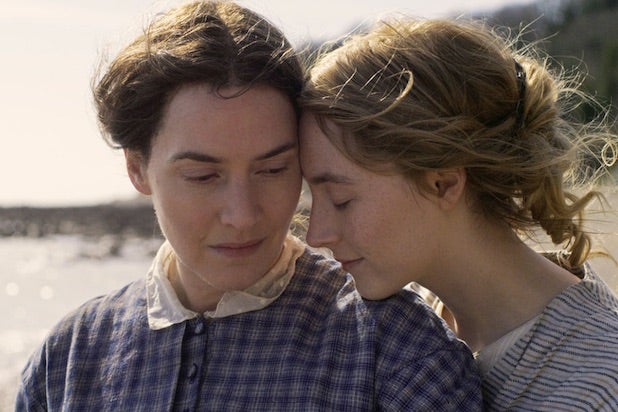 Francis Lee’s “Ammonite” might be the biggest study in contrasts that you’ll find at the Toronto International Film Festival this year. The story of a passionate, almost desperate romance between two women in 19th century Britain, it sets that passion in an austere, minimalist frame; it’s either the most reserved passionate movie you’ll ever see, or the most passionate reserved one.

The upcoming Neon release is also a beautiful, deeply-felt character study of the women marvelously played by Kate Winslet and Saoirse Ronan. But it’s so quiet that it makes you lean into the narrative and strain for the details that come out slowly — and even its most charged love scene grounds sexual pleasure deeply in pain, longing and separation.

The film comes a year after Celine Sciamma’s gorgeous “Portrait of a Lady on Fire,” another period drama that focused on the romantic and sexual relationship between two women — but where “Portrait” was lush and extravagant, “Ammonite” is spare and hushed. Its pleasures are subtle, but they linger.

Lee’s last film, his feature debut, was 2017’s “God’s Own Country,” the Sundance- and British Independent Film Award-winning drama about a romance between two men on a Yorkshire farm. “Ammonite” is similarly rural in setting, taking place in the small seaside town of Lyme Regis in southern England — but it takes place in the 1840s, when paleontologist Mary Anning would walk the rocky shoreline searching for fossils and gathering specimens to sell to tourists.

Anning was a real paleontologist who lived in Lyme Regis and made some extraordinary finds but wasn’t afforded the respect she deserved because she was a woman, and the rough details of her life in “Ammonite” are accurate. But the film is also a fictionalized version of a moment in Anning’s life, with Winslet breathing sad, vibrant life into a scientist who may or may not have had a same-sex relationship with Charlotte Murchison.

Saoirse Ronan plays Murchison, who is pulled into Anning’s desultory shop by her husband, Roderick Murchison (James McArdle), a would-be scientist who is much impressed by the fact that a celebrated (if underpaid) paleontologist is holed up in Lyme Regis. He offers to pay Anning if she’ll allow him to tag along for a day of fossil-hunting — and while Anning is a severe, matter-of-fact woman who will not allow herself to be the least bit friendly or accommodating, she accepts the offer.

Also Read: Kate Winslet Now Regrets Working With Woody Allen and Roman Polanski: 'What the F- Was I Doing?'

For her part, Charlotte is meek and quiet; she briefly perks up when a maître d’ attempts to seat her and her husband in a crowded dining room, but he prefers a quieter room and she remains subservient. There’s a hint that perhaps they’re recovering from the death of a child, but nothing is spelled out, except that Charlotte is suffering from what Roderick patronizingly calls “a mild melancholia.”

Roderick, who is anxious to get on with his planned fossil-hunting trip across Europe, decides Charlotte should recover from that melancholia in Lyme Regis, as if a cold and dreary seaside town in which she knows nobody is the ideal place to cheer up. He pays Anning to watch over her, an arrangement that doesn’t please the older woman — but then, what does?

Mary is brusque and forceful, Charlotte quiet and timid; at first, they seem bonded only in a general moroseness, neither woman showing the inclination or perhaps the energy to smile. Mary’s misery seems to have been slowly settling inside her for decades; Charlotte’s is more recent, and of unknown but likely traumatic origin.

But when Charlotte collapses at the door to the shop where Mary works and lives with her mother, the doctor insists that Mary become a nursemaid of sorts as well, turning her bed over to Charlotte and tending to her needs. “You look tired,” Charlotte tells her early in her convalescence. “I always look tired,” Mary says, accurately.

We wait for something to happen, but the movie is as quiet and restrained as the characters. French cinematographer Stéphane Fontaine brings a richness to the foggy shoreline and the tired town, but it’s a forbidding richness, and the vast majority of the film passes without a trace of music on the soundtrack.

Because of that, the silence that envelops “Ammonite” develops an almost physical presence. An hour into the film, tired of watching Mary try to sleep in a chair in the corner of the room, the still-convalescing Charlotte says, “We should share the bed.” It’s an innocent statement, and a logical suggestion, but it hangs heavy in the quiet of the little room.

But not much happens for a while longer, though we gradually get the idea that Mary may have been in a previous relationship with a local woman, Elizabeth Philpott (Fiona Shaw), that ended poorly. When the doctor invites Mary to concert at a local home, she insists that Charlotte come as well — but even there, the two women barely speak, until Charlotte begins chatting with Elizabeth and Mary flees outside in the rainy night.

In the party’s aftermath, there’s the mildest of flirtations — just a sentence, really — and Mary offers a few lines from the haunted poem “Solitude” by the late 18th century British poet Henry Kirke White: “Yet in my dreams a form I view / That thinks on me, and loves me too / I start, and when the vision’s flown / I weep that I am all alone.”

These are charged moments, but they take place in silence and then fade away. But the next day, as the women dig in the mud on the beach, there’s a touch of music, a hint of strings that are gentle and exquisite, followed by a kiss, a hug and some clutching that seems more desperate than passionate.

The passion does come, in a luminous but wrenching love scene choreographed by Winslet and Ronan as a sensual dance rooted in loneliness and in the shock of connection. Like the rest of the film, it is beautiful and austere and sad.

Throughout “Ammonite,” Lee makes the bold decision to hold back, to be restrained and let the story play out in glances and in the silence between words. Winslet, no stranger to wrenching displays of sorrow, takes a character who wants to be off-putting and makes her heartbreaking — and Ronan, in the most mature performance of an already-remarkable career, coaxes Charlotte back to a lovely life but never lets us lose sight of the calculations that lie underneath that life.

While it’s a mistake to overlook the contributions of Shaw or of Gemma Jones as Mary’s mother, “Ammonite” is a chamber duet by two virtuosos. Deeply emotional but rarely sentimental, it is orchestrated by a director who is determined to have every moment of pain or pleasure play out with exquisite restraint.