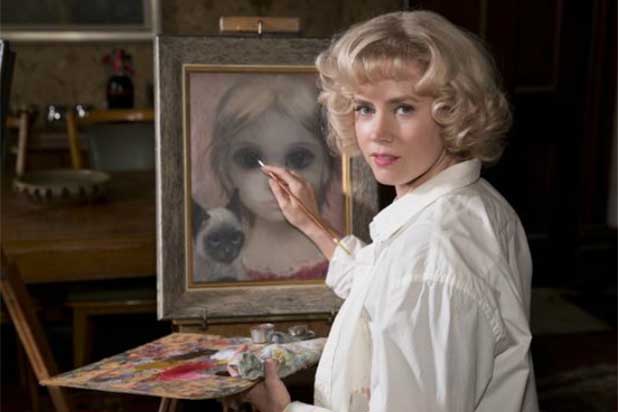 Amy Adams has received five Oscar nominations in the last nine years, which ties her with Meryl Streep as the most-nominated actor or actress in that stretch. (Philip Seymour Hoffman, George Clooney and Cate Blanchett” are next with four.) She’s in the running again with Tim Burton’s “Big Eyes,” the story of real-life artist Margaret Keane, who created iconic (if kitschy) paintings of children with enormous eyes in the 1960s, but sat by quietly while her husband Walter claimed credit.

Adams plays the long-suffering Margaret while Christoph Waltz is the overbearing Walter, a born salesman who persuades her that the work won’t sell if people think it was done by a woman — a fiction she reluctantly maintains until after their divorce, when a bitter lawsuit brings Walter’s fantasies crumbling down in a lengthy and uproarious courtroom sequence.

THEWRAP I understand you weren’t really won over the first time you were approached about doing “Big Eyes.”
AMY ADAMS  I think it was just where I was in my life at that time. I was attracted to what I assumed to be confident characters, and didn’t think she was strong. But that was about four or five years ago, and after I had my daughter I read it again and identified with Margaret as a mother. For the first time, I saw her as a little more than just a victim.

When did you meet the real Margaret Keane?
It was in the preparation. I had just come off “American Hustle” – my fake tan faded and I went right into this. I flew up to Northern California and met Margaret and spent the day with her, and that was the key to the character. I recognized exactly who she was and how she was to be portrayed.

In what way?
Meeting her, there was a strength I wasn’t expecting. She was very quiet, not one to speak of herself, but she very much likes the paintings. When she sat down, she presented me with scrapbooks – but they weren’t scrapbooks of family pictures or clippings, they were scrapbooks of her paintings over the years. I really do believe she likes the work to speak for her.

But she has a quiet strength, and a steely strength, and I wanted to get there with the character. Not every person who is strong is a big showboat about it.

That must have been a big change from the experience of playing a brazen con woman in “American Hustle.”
That experience was like a freight train. I love the way that David [O. Russell] works, but I also love quiet conversations and breakdowns of things, and this was just two people having conversations with the director. It was nice to get centered back in a more intellectual space.

Why do you think Margaret went along with the deception that Walter did the paintings?
She was definitely in love with Walter and trusted him. And she was devastated by his deceit, but she became complicit in it, and was overcome by her guilt. And she was also very scared and uncertain of her what would happen to her if she told the truth. He told her that they could take her daughter away. If anything, she was naïve.

Playing a woman who is so laid-back and timid in many ways, did you worry about not having enough to work with?
I was just concerned with telling the truth of the character. I know there might be a danger in being overly subtle, but I don’t ever think that’s a problem. I think it’s more important to tell the truth of the character than to concern yourself with whether people are impressed with your bravado.

As you were playing her, were you thinking to yourself, I wonder what Margaret is going to think of my performance?
Of course you think that. You want to honor her. But she gave me her blessing, and so I just had to hope that I was playing her in a way that she would be comfortable and happy with.

Was she?
I still haven’t spoken to her about her reactions. I thought it would be weird for me to call and try to get a compliment from Margaret. [Overly cheery voice:] “So, what did you think?” But I’m going to see her on Tuesday, so I’ll ask her then.

It must have been a big change to go from “Big Eyes” to “Batman v. Superman: Dawn of Justice.”
I’d done it before. I went from “The Master” into “Man of Steel,” so I’m familiar with that shift. This time, I was definitely prepared. The first time, I had trouble: I like working in a very quiet way and letting my character to live and breathe. I’m not used to reacting to explosions, let’s put it that way. So I was reacting subtly, and Zack [Snyder] was saying, “You’re being pulled into a vortex!” I finally said, “You’re not seeing it at all from me, are you?” I had to learn the technical part of acting with all those extremes.

With “The Fighter” and “American Hustle,” it was almost as if David O. Russell was saying, “I’m going to change Amy Adams’ image from good girl to tough girl.”
[Laughs]

Or was that Amy Adams saying, “I’m going to change Amy Adams’ image?”
I was just never really concerned about that, I think because I know who I am. For me, the fact that people thought I was something else didn’t bother me. Although I saw a common thread in my characters, I saw them as very different people. So I was always just was very patient, waiting for when the time was right and the role was right.

I wasn’t actively pursuing showing someone anything. Bu I do enjoy the way that that’s opened up opportunities and different pathways in my career.

So have those films changed the kind of roles you’ve been offered?
It wasn’t so much a change in the things I was offered, it was more that people have stopped asking if I thought I could do it. I used to have directors asking, “Do you think you can be tough?” I knew I could be tough, but that was always hard for directors to see. Because I am very polite. I’m not going to be the person who pushes to the front of the line and says, “Look at me!” It’s just not my nature.

I know people don’t believe that about an actress, but it’s true.