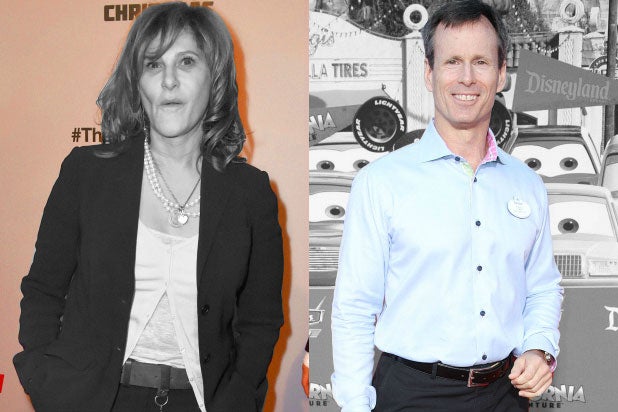 The executive shakeups at Sony Corporation and Walt Disney Company on Thursday gave small boosts to the respective stock of each company.

Around noon eastern time, news came of Amy Pascal stepping down as Sony Pictures Chairman, with her departure coming about two months from a crippling hack against her company as protest for its Seth Rogen-James Franco film “The Interview.” Sony Pictures Entertainment is the American entertainment subsidiary of Japanese multinational technology and media conglomerate Sony.

After the news came out, Sony Corp. stock (ADR/SNE on the New York Stock Exchange) traded slightly up at the end of the regular U.S. trading day. The company’s stock dropped in mid December but has been climbing since.

Sony Corp saw a stock price lift begin in late 2012, though spent much of the next two years fluctuating up and down, not making a great deal of headway overall. It appears to be on the rise thus far in 2015.

On Wednesday, Disney stock closed at an all-time high of $101.28. The price per share has been steadily surging since the economic crash of 2009, save a downturn in September 2011.

A day earlier, the company topped quarterly earnings forecasts, thanks in part to merchandise sales from its hit “Frozen” movie. Also contributing to the happy surprise was TV affiliate fees and higher program sales from “Criminal Minds,” “Scandal”and “Once Upon A Time.” Home Entertainment and TV/SVOD distribution also helped out.