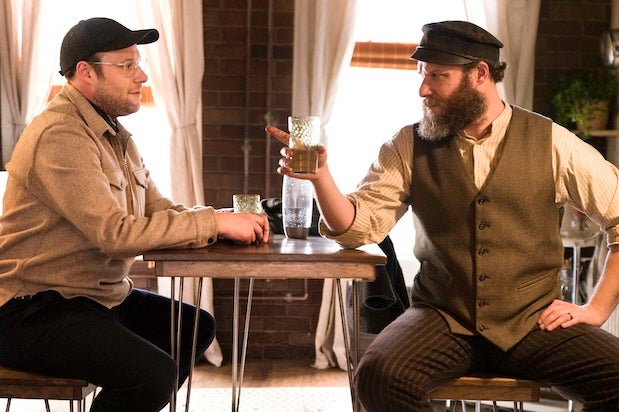 From “The Out-of-Towners” to “Splash” to “Coming to America” to “Enchanted” and beyond, there’s a long history of movies in which waifs, innocents, outsiders and fish out of water gaze at the streets of New York City with uncomprehending awe and then try to make their way through a landscape that seems as foreign to them as the dark side of the moon. And with Seth Rogen joining that roster with “An American Pickle,” you have to figure that his entry will be among the goofiest, broadest and loopiest of the bunch.

It’s not. Despite Rogen in dual roles as an Eastern European peasant who awakens in Brooklyn after 100 years in a vat of pickles and as his great grandson, a freelance app developer, this is a surprisingly subdued and sentimental riff on Rip Van Winkle meets “Being There.” You might find yourself unexpectedly touched by it, but it’s hard to shake the feeling that it’s not the best use of Rogen’s particular skill set.

Written by “Saturday Night Live” writer Simon Rich and directed by cinematographer-turned director Brandon Trost, “An American Pickle” premieres on HBO Max on Aug. 6, though the Sony Pictures Entertainment label in its opening credits points to its original, pre-pandemic destination as a theatrical release.

Also Read: 'An American Pickle': Seth Rogen Falls Into a Vat of Pickles and Meets His Own Great-Grandson in HBO Max Trailer (Video)

It opens in 1919, in black and white and in the fictional Eastern European country of Schlupsk, where Herschel Greenbaum is a ditch digger whose shovel keeps breaking and whose wildest dream is to one day be able to afford seltzer water. He falls for Sarah, a local woman who “has all her teeth, top and bottom” and whose own pipe dream is to be so rich that she can afford her own gravestone. (She’s played by Sarah Snook, who has very little to do.) When their entire village is ransacked and destroyed by Cossacks, they head for the United States, where Sarah gets pregnant and Herschel gets a job killing rats in a pickle factory.

But this is just a dour pre-credits setup that shows off Rogen’s thick beard and thicker accent. Before long, he falls into a vat of pickles just as the factory is being condemned, and his body lies undisturbed for 100 years until he’s discovered, alive and wet, by a pair of boys trying to retrieve an errant drone.

“An American Pickle” makes a joke out of how easily the doctors and the press accepts the explanation that the pickle brine kept Herschel preserved and alive for a century. And then, having neatly established that people believe all sorts of ridiculous stuff in this film, it milks that premise for all its worth for the next hour-plus. You might feel as if what’s going on doesn’t make a lick of sense in a universe occupied by actual human beings, but the movie has already established that we’re not in that universe, so stop your nitpicking.

Also Read: Lil Nas X, Seth Rogen and Other Celebs Hit Back at Tucker Carlson for Disparaging Their Donations

It turns out that Herschel has one living relative, Ben Greenbaum, a mobile app developer who is somehow just successful enough to afford a pretty spacious Brooklyn apartment that to Herschel seems like a palace. (And it’s got a seltzer machine!) Rogen spends most of the movie sharing scenes with himself: Herschel and Ben get along, then become mortal enemies after Herschel accidentally sabotages Ben’s big business opportunity.

“An American Pickle” has some fun with the idea that a bearded Eastern European pickle maker dressed and coiffed for 1919 would just seem like another hipster in today’s Brooklyn. He may make his pickles by pulling cucumbers out of the trash and brining them in jars he finds on the street, but locals take one pungent whiff and explain, “It would go so good with the kelp ceviche!”

Social media makes Herschel a star (until it cancels him), and for a spell he essentially becomes Chauncey Gardiner, the Peter Sellers character in “Being There” whose very inane utterance is plumbed for its depths of insight. But “An American Pickle” doesn’t really try to be “Being There,” which would be impossible; instead, that’s just a phase it goes through as the tangled fish-out-of-water story shifts from slapstick to satire to no-place-like-home sentimentality.

The problem, in a way, is that it just isn’t terribly funny. Rogen gets to play two parts, but you can add them together and not get the energy or life he typically shows playing a single role. (Though if you’re tired of his slacker/stoner persona, it’ll be a plus that you don’t get any of that.) Ben is mostly morose, and Herschel’s humor is centered in mild belligerence and that thick accent.

The film is tiring at times and amusing at times at others, and successful mostly if you’re willing to embrace a certain low-key sweetness that eventually smooths out whatever edges the humor had. If you want a comedy that works hard to be touching, you might find that here – but honestly, you’d expect a movie about pickles (and a movie starring Rogen) to have more of a bite than this.