David E. Kelley knows how to craft compelling courtroom dramas, and in Netflix’s “Anatomy of a Scandal,” which dropped Friday, he and fellow creator Melissa James Gibson have put together a dark and twisty limited series involving political figures, criminal accusations, and the unique traditions of the justice system on the other side of the pond.

Starring Sienna Miller, Michelle Dockery, Rupert Friend and Naomi Scott, the series follows the lives of Sophie (Miller) and James (Friend) after he, a British politician and member of the upper class, is accused by a former coworker with whom he had an extramarital affair, Olivia (Scott), of sexual assault. Dockery plays Kate Woodcroft, a QC (Queen’s counsel) barrister prosecuting James.

Just like “Big Little Lies,” Kelley’s latest series (which is based on the novel from Sarah Vaughan) is complex and full of plot twists. And all of the actors had a full set of scripts before filming the series, so they knew ahead of time exactly where things were headed. 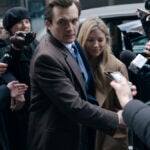 Also Read:
‘Anatomy of a Scandal’ Review: Netflix Limited Series Is a Rich Tale of Consent and Accountability

“We were all given all six scripts to begin with, so we got to see the entire story and we read, some of us, well, most of us by the sounds of it, all read the book so that we have a sort of source of where the story came from,” Dockery told TheWrap. “I am a very big David E. Kelley fan and so I was really excited when I when I got this script and … these stories he does, he does so well at executing them.

“These stories of these seemingly perfect lives exploding into chaos is really entertaining,” she continued. “I think people really love seeing that. There seems to be a sort of trend for it. And of course, the show tackles some really, really tough issues. And I think it’s entertaining, but it’s also really informative and potentially creates conversation. And so, to be part of something like that, all of the ingredients really were there for me, it was it was a no brainer to jump on board.”

For Friend, who plays politician James, he “just inhaled” the scripts when he got them because they were “addictive in the way that” the cast hopes the show will be to audiences. He wasn’t sure he wanted to play James, someone from a world of entitlement, though, for six months of the year. But Friend realized that how the character views the world would create an acting challenge.

“And of course, in the end a difficult thing to do is probably a good thing to do because challenge is pretty great to embrace,” he said. 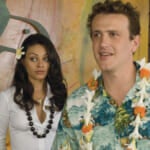 A good amount of the drama within the six episode series takes place in a British courtroom, featuring Dockery in those curled white wigs and long black graduation-style robes, Friend and Scott having to stand to give testimony from a witness pulpit, and Miller in an upper viewing gallery as her character supports her husband. It’s a change for those used to American style “Law & Order” type dramas, but full of traditions from centuries gone by.

“Our legal system was founded hundreds of years ago so there is this kind of archaic aspect to it that I find really interesting,” Miller said. “It’s sort of riveting the pomp and ceremony are really very much unchanged since its inception.”

“There’s a theater about it,” Friend, who was paired with Miller for their “Anatomy of a Scandal” interviews, said. “If you think about sort of classical images of London for tourists, you’ve got Beefeaters and changing of the guard, who don’t actually guard, you know. They don’t actually kind of fight anything. That’s more of the dress and the hat and the horse and all that and I feel like elements of the legal system here have that about them. There is the symbolism of the wig and there is, you know, these ceremonies, the pomp and circumstance as Sienna said which give it … yeah, kind of theatrical air.” 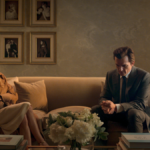 And interwoven with the tense court scenes, are storytelling techniques driven by executive producer and director S.J. Clarkson, Scott explained.

“Something that was interesting was S.J.’s use of transitional flashbacks and kind of going from one moment and saying a line in the past that you’re saying in the present in the courtroom,” she said.

“It’s a really good tool, I think, and a really interesting cinematic choice that I think really pays off,” she added.

“Anatomy of a Scandal” is available to stream on Netflix now.