“Tell Them Anything You Want: A Portrait of Maurice Sendak,” a 40-minute documentary about the famed children’s author directed by Lance Bangs and Spike Jonze, premieres on HBO on Wednesday night — two days before Jonze’s feature version of Sendak’s “Where the Wild Things Are” hits theaters.

At least, they're calling it a premiere. In fact, the Sendak film’s actual public debut took place on Aug. 14 at Laemmle’s Town Center, a small multiplex in the Los Angeles suburb of Encino. 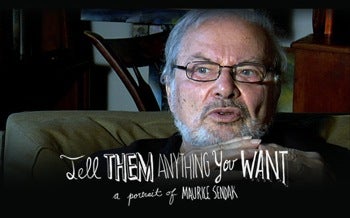 It played quietly for one week, the minimum required under rules to qualify … not for an Emmy but for an Academy Award.
Apparently not content with dominating the Emmys, television’s most successful cable network has quietly become a major player at the Academy Awards, as well.
When the Academy’s documentary branch announced its shortlist of films that remained in the running for the documentary-short award, fully five of the eight had some connection with HBO.
“The Last Truck: Closing of a General Motors Plant” debuted on HBO on Labor Day. “China’s Unnatural Disaster: The Tears of Sichuan Province” did so in May.
“Music by Prudence,” which deals with an African musical group made up of physically disabled musicians, is an HBO film that has yet to air on the network. And “The Last Campaign of Governor Booth Gardner,” a look at the former Washington governor now fighting for assisted-suicide laws, was distributed by HBO in its Oscar-qualifying run, according to Laemmle Theaters.
“The Last Campaign of Governor Booth Gardner” and “Music by Prudence” played the Town Center the week after the Sendak film; “The Last Truck” ran there in July.
"There’s no question that HBO has been good for documentaries overall — but I do wonder if they aren’t hijacking the process a little bit,” says one documentary filmmaker who did not want to be identified criticizing the network. “The Oscars are pretty adamant about wanting to honor theatrical documentaries — and the HBO films are only theatrical long enough to qualify.”
The Oscar-winning short documentarian Eric Simonson has no such qualms.  “The fact of the matter is, there’s really nowhere else to go if you’re interested in making short documentaries,” he says. “You could try to get through the labyrinth at a place like PBS, but nobody has the resources of HBO.”
Simonson said that when he made his first documentary, “On Tiptoe: Gentle Steps to Freedom,” about the musical group Ladysmith Black Mambazo, he had no thought of theatrical distribution and no idea of the Oscar rules. But HBO liked his rough cut, hired him an editor to bring the film under 40 minutes (another Academy requirement) and gave him the theatrical run he needed to win a nomination.
On his next film, “A Note of Triumph: The Golden Age of Norman Corwin,” HBO saw an early edit and passed on the film. But Simonson knew the rules by then, so he paid for his own theatrical run, got a nomination and won the Oscar — at which point HBO stepped in and bought his film.
“Somewhere along the line,” he says, “you’ll end up at HBO. If there’s a good short documentary out there, HBO knows about it.”
Over the years, HBO documentaries have won 20 Academy Awards, both feature-length and short, and competed for dozens more. But unlike the way it treats its Emmy dominance, the network participates in the Oscar race quietly, downplaying rather than trumpeting its success.
Sheila Nevins, the head of HBO Documentaries, once discussed Oscar qualifying with the Washington Post and said, “I can play the game.” When contacted for this story, though, an HBO spokesperson declined to make Nevins or anyone else available to TheWrap, saying the network does not comment about the Oscars.
HBO’s impressive showing in the category comes not long after the Academy made significant changes in its rules to make sure that the competing documentaries are theatrical films, not TV movies that know how to get through the loopholes.  At one point, the AMPAS documentary branch, which was formed in 2001, insisted that documentary features had to play in 14 different cities to be eligible.
At the time, branch governor Michael Apted said the move was necessary because of some filmmakers' practice of renting a theater for a week to “chase the nomination.” Apted told filmmaker and blogger A.J. Schnack at the All These Wonderful Things website, “The Academy got all these submissions that had no real attempt at a theatrical plan, and these are awards for theatrical movies.”
After widespread criticism that the 14-city rule made it too difficult to qualify, the branch changed the requirement to seven-day engagements in both Los Angeles and New York. But the rule for short docs, which obviously have less theatrical potential than features, remained at one week in L.A.
“The real question here is what the Academy hopes to accomplish with its awards for short documentaries,” says Schnack, whose website offers a comprehensive look at documentary films.
“Most film festivals that show shorts want eight-to-10 minute films, but the Academy tends to honor 40-minute, big-issue shorts. If that’s what they’re looking for, then it’s only natural that HBO is going to dominate the category. There aren’t a lot of people making those kinds of shorts, and HBO is where they go to get them made.”
When HBO paid $1 million for the rights to the controversial feature documentary “Roman Polanski: Wanted and Desired” (which got its own stealthy run so that it could “premiere” on HBO but also qualify for an Oscar), Schnack remembers Nevins saying that there were two things that mattered to most filmmakers: winning an Oscar, and getting your film on HBO.
In the documentary shorts category, clearly, filmmakers have a chance to kill two birds with one stone.