Andre Braugher has joined the cast of the Harvey Weinstein investigation film “She Said,” and he will portray New York Times editor Dean Baquet in the film.

The “Brooklyn Nine-Nine” star joins a cast that includes Carey Mulligan and Zoe Kazan as New York Times reporters Megan Twohey and Jodi Kantor, who broke the Weinstein scandal and helped usher in the #MeToo movement. Patricia Clarkson also stars in the film.

The film is specifically based on the book “She Said: Breaking the Sexual Harassment Story That Helped Ignite a Movement,” and Oscar winner Rebecca Lenkiewicz (“Ida”) adapted the screenplay. “She Said” is being directed by Maria Schrader, an Emmy winner for Netflix’s “Unorthodox.”

“She Said” is being released by Universal and comes from Annapurna Pictures and Plan B Entertainment, which optioned the rights to Twohey and Kantor’s book in 2018 under their co-production deal.

Megan Ellison is executive producing for Annapurna with Sue Naegle, and Brad Pitt, Dede Gardner and Jeremy Kleiner are producing for Plan B. Universal’s Vice President of Production Lexi Barta will oversee the project for the studio. 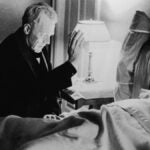 Braugher will reprise his role as Raymond Holt in the final season of “Brooklyn Nine-Nine” premiering Thursday. He’s also an Emmy winner for the series “Life on the Street” and the TV movie “Thief,” and he’s been Emmy-nominated for “Nine-Nine” four times.