With great power comes great responsibility, so Andrew Garfield took it upon himself to let Marvel fans down easy on Tuesday. During a conversation with Josh Horowitz on the “Happy Sad Confused” podcast, Garfield vehemently denied reports that he would be returning to the Marvel Cinematic Universe in this year’s “Spider-Man: No Way Home.”

Upon Horowitz bringing up the rumors, Garfield, who served as our friendly neighborhood Spider-Man in two of Sony’s films back in 2012 and 2014, insisted he’s not suiting up for the Tom Holland-starring sequel.

“I wish I could be able to speak to everyone and just say, ‘I recommend that you chill,'” Garfield said about the rumors. “Listen, I can’t speak for anything else but myself. They might be doing something, but… I did not get a call.”

Also Read:
Marvel Phase 4 Timeline: Here’s When Each Movie Will Be Released

The actor added, “I would’ve gotten a call by now, that’s all I’m saying. But I don’t want to rule anything out. Maybe they’re going to call me and say, ‘Hey, people want this!'”

Rumors of Garfield’s possible return to the MCU began swirling when it was announced that Alfred Molina, who played supervillain Doctor Octopus in Sam Raimi’s “Spider-Man 2” in 2004, would be reprising the role in “No Way Home.”

Molina’s casting suddenly opened the door for more former cast members to return. Last December, a viral tweet from @DrMovieNews claimed former “Spider-Man” stars Garfield, Emma Stone, Tobey Maguire and Kirsten Dunst were set to return in “what may be the most ambitious crossover in the MCU thus far.” Collider then speculated those actors would either appear as alternate dimensional versions of Holland and Zendaya’s Peter and MJ, or as new characters entirely.

The prospect of Marvel going that meta is understandably exciting, but according to IMDB, only Molina is officially confirmed for “No Way Home.”

But of course, there were some fans whose spidey senses had them questioning whether Garfield is just playing coy. Many skeptical Twitter users cited Disney’s use of non-disclosure agreements, especially on high-profile projects such as this one, as reason enough for Garfield to obscure his involvement in the film. And then there was Twitter user @iamthatroby, who simply reminded us, “Andrew Garfield is an Oscar nominated actor…”

“Spider-Man: No Way Home” is slated for release on Dec. 17, 2021. As to whether Garfield or any other ghosts of Marvel past will come back from the dead remains to be seen. 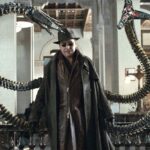