Spoiler alert: If you haven’t seen “Spider-Man: No Way Home,” it’s probably too late but you might want to stop reading.

But if you have seen it, and if you’re enough of a fan to have paid attention to the rumors that were flying about which actors were making surprise appearances in the blockbuster hit, you probably know that Andrew Garfield spent a lot of time this fall misleading you and everyone like you by swearing that he absolutely, positively wasn’t in the movie.

And now that the movie has opened and the secret is out – yes, Garfield is in “No Way Home,” alongside his fellow Spider-Men Tobey Maguire and Tom Holland – Garfield is not sorry that he lied about it. A little uncomfortable, maybe, but not sorry.

“It was stressful, I’m not gonna lie,” he told TheWrap this week during an interview about another of his films, “tick, tick…BOOM!” for an upcoming awards magazine. “It was rather stressful but also weirdly enjoyable.” 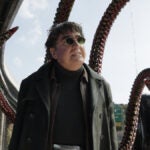 Garfield compared the experience to playing the party game in which some people in a group are assigned to be werewolves but must hide that identity from their friends. “It was like this massive game of Werewolf that I was playing with journalists and with people guessing, and it was very fun,” he said.

“There were moments where I was like, ‘God, I hate lying.’ I don’t like to lie and I’m not a good liar, but I kept framing it as a game. And I kept imagining myself purely as a fan of that character, which is not hard to do.

The answer to those questions, he said, was clear. “I would want the actor to do an incredibly good job at convincing me he wasn’t in it. And then I would want to lose my mind in the theater when my instinct was proven right. That’s what I would want.”

And that’s why, during interviews about “tick, tick…BOOM!” and “The Eyes of Tammy Faye,” he kept insisting that the rumors about scenes with all three of the franchise’s Spideys were false, that it sounded like a fun idea to return to the role he’d played in 2012’s “The Amazing Spider-Man” and its 2014 sequel, but he hadn’t gotten a call about it. 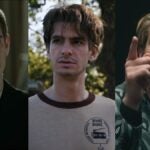 “Like anyone who’s played the game Werewolf knows, if you are the werewolf your heart kind of sinks because you know you have a stressful couple of hours ahead of you,” he said. “You’re gonna have to lie to your friends’ faces and try to convince them that you are not the bad guy in the game.” He shrugged. “But it was thrilling, actually.”

He was so immersed in the game, he said, that it upset him when it appeared as if leaks from the film’s set could spoil the surprise. “I worked so hard to keep it secret that I was in Atlanta shooting,” he said. “All these leaks were happening, and I was like, ‘Oh, my God, guys, what the hell is going on? I’m working so hard here to stay secret, and then here’s an image of me with Tobey!’ And they’re like, ‘No, no, we’re gonna keep it quiet.’ ‘OK, I’ll keep denying it.’

“I was happy to do it, but it was a lot of work on everyone’s part. It obviously gave people a big thrill in the theater, and what more do you want from a theater experience than a thrill?”

A laugh. “It’s been a rare experience to play that mass game of Werewolf with every single Spider-Man fan in the world. That’s been incredibly fun.”