A documentary about the acclaimed and mysterious cult comedian Andy Kaufman is in the works from producers Morgan Neville and Josh and Benny Safdie.

The untitled feature film about Kaufman is being directed by Alex Braverman and is in production from Neville’s Tremolo Productions and the Safdie’s Elara Pictures. Neville is producing, while the Safdies will executive produce, as will famed record producer and filmmaker Rick Rubin. Braverman’s father Chuck Braverman, who previously produced Kaufman’s 1980 special “Andy Kaufman Plays Carnegie Hall,” is also execeutive producing, as is Wavelength founder and CEO Jenifer Westphal.

Kaufman, who died in 1984 after a battle with cancer, has maintained a remarkable mystique since his untimely death for his peculiar performance art and unmatched dedication to his comedy, even though he fully believed that he was not a comedian and never told a joke but was more accurately an entertainer. He became famous for his work on “Taxi” and “Saturday Night Live” but has endured for the secrets behind his lounge singer character Tony Clifton and his wrestling persona alter ego. In fact, rumors have swirled to this day that because of Kaufman’s immense dedication to his art that his whole death may be an elaborate hoax.

The film has signed an exclusive deal with Kaufman’s key creative partners, including Bob Zmuda and Lynne Margulies Osgood, who will appear in the film, and it has also secured exclusive rights to key films, as well as much of Kaufman’s early work, alongside never-before-seen footage and audio recordings of the comedian.

The film is not yet set up with a studio or network.

“No matter how many times I watch Andy Kaufman’s work, I feel like I’m seeing a magic trick for the very first time,” Braverman said. “I’m excited for our project to honor that. This is the film I’ve wanted to make my entire life.”

“A real dream team of partners have come together to make this film,” Neville added. “Alex is an exciting director who has a vital take on the story, the Safdie Brothers are true originals just like Kaufman himself, and Chuck Braverman and Wavelength are incredible collaborators and champions for this film’s unique vision. I’ve loved Kaufman since I first discovered him on ‘Saturday Night Live,’ and I’ve always thought of this project as not only an opportunity to celebrate his genius but to push the form, just as Andy did with his comedy.” 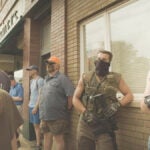 “Why hasn’t anyone made the definitive Andy Kaufman documentary yet?” Westphal said in a statement. “We are thrilled to offer audiences a new perspective and understanding of the personal and professional life of an iconic performance artist.”

Tremolo and Wavelength previously partnered on Neville’s “Won’t You Be My Neighbor?,” and Neville and Rubin also previously worked together on the Showtime docuseries “Shangri-La.”

ICM Partners and WME Independent are representing the project.