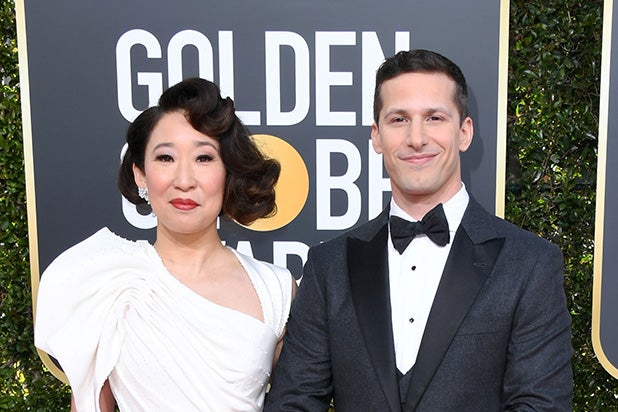 If you think awards shows are too self-congratulatory, you probably wouldn’t like Andy Samberg and Sandra Oh’s cheery Golden Globes opening, in which an ironic “roast” of fellow celebrities turned into the co-hosts lavishing compliments in a Hollywood love-in.

After two political years, Samberg and Oh joked that they were chosen by not saying anything offensive to anyone. They did manage a few hard-edged jokes — including Samberg joking to “Black Panther” director Ryan Coogler that the actual Black Panthers were framed for murder. But their main joke was pretending to roast attendees while actually celebrating them.

“You fools are all about to get roasted Gervais-style,” Samberg announced, before telling his first target, Spike Lee: “Lifetime fan, can’t wait to see what you do next!”

Samberg told Jeff Bridges: “I wish you were my dad.”

They also joked that one member of the audience would win a huge prize: Hosting the Oscars.

This year’s Globes come a day before Oscar nomination voting begins on Monday, which means the Globes will be fresh in Oscar voters’ memories as they cast votes for films ranging from “Roma” to “Black Panther” to “A Star Is Born.”

But the Globes aren’t expected to directly influence Oscar voting, because there are huge differences in background between the 90-odd members of the Hollywood Foreign Press Association who vote for the Globes and the 7,000-plus film professionals who cast Oscar ballots.