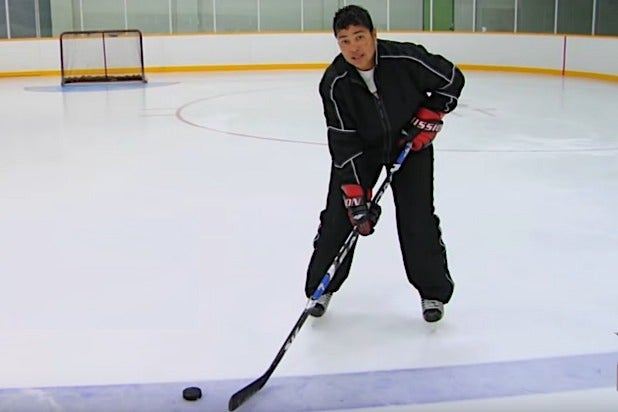 It’s been a contentious Oscars season, which might make this exactly the right moment for Hollywood to film the life story of Angela James. If you don’t know who Angela James is — but do run a film studio that can finance a mid-budget sports dramedy with potential crossover appeal to everyone on earth — stop whining about your champagne hangover and listen to the new “Shoot This Now” podcast on Apple or right here:

Born in Toronto to a black father and white mother, Angela James went from defending herself from bullies in the projects to becoming one of the first women ever inducted into the Hockey Hall of Fame. She was also the first openly gay athlete to be inducted into a major sport’s Hall of Fame, and is widely regarded as the “Wayne Gretzky of women’s hockey.”

On every episode of “Shoot This Now,” we talk about the movies we would pay to go see. This one checks a lot of boxes. It has the grit of “Miracle” and “Warrior,” with the fish-out-of-water and blue-collar racial dynamics of “8 Mile.” We haven’t seen a massive female-centered sports film since “Million Dollar Baby,” and unlike that masterpiece of sadness, James’ biography is happy and uplifting.

In short, Angela James’ life story has something for everyone: She’s a strong and complex character who overcame racism, sexism and homophobia with courage and, somehow, a sense of humor.

You like even more adversity in your stories? We haven’t even mentioned the stuff she had to go through in 1998. It’s in the podcast.

Plus, she’s a Canadian hero. They’ve been in pretty short supply since “Logan,” and even then, poor old man Wolverine was played by an Australian.

Yes, we understand the potential flaw of Angela James story: Many people feel that hockey is… boring.

But we think we’ve got an idea for a montage scene that will get audiences invested in a bunch of people slamming into each other on a block of ice. Actually, now that we describe it that way, hockey sounds sort of cool.

So whether you’re a “Green Book” person or a “BlackKklansman” fan, we think you’ll enjoy our half hour of contemplating how to bring Angela James’ life story to the screen. She’s currently the senior sport coordinator at Toronto’s Seneca College, and, hey, you’re some kind of fancy Hollywood executive or something. Call her.