Angelica Ross is set to make history as the first openly trans woman to lead a Broadway show, stepping into the shoes of the iconic Roxie Hart of “Chicago.”

Now in its 25th year, “Chicago” and its leading nightclub dancer-turned-murderess Roxie have regularly cast buzzy headliners, most recently with Pamela Anderson, who wrapped her eight-week stint earlier this year. But never before has the role been played by a transgender actress.

“Chicago” follows the intrepid musical adventures of criminal and wannabe star Roxie Hart as she adjusts to life behind bars and tries to make another killing with the help of celebrity defense attorney Billy Flynn and her frenemy cellmate, jazz performer and fellow murderess Velma Kelly.

Ross is no stranger to pushing boundaries for the LGBTQ community. The founder and CEO of TransTech, the first trans-led nonprofit and job-training organization for trans people in tech, Ross is also a singer, songwriter, and outspoken human rights advocate.

Speaking on Ross’ historic casting as Roxie Hart, GLAAD Vice President of Communications and Talent Anthony Allen Ramos said in a statement: “‘Chicago’s’ Roxie Hart is one of the most recognizable, iconic and beloved characters in the history of Broadway, and a true talent like Angelica Ross will delight audiences with her impressive acting, singing and performance skills. Angelica is also a respected leader in the transgender community, and joins L Morgan Lee as trans women of color currently starring on Broadway.” (For her work in “A Strange Loop,” Morgan Lee became the first openly transgender performer to be nominated for a Tony Award earlier this year.) 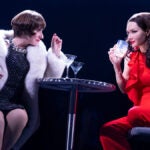 Also Read:
Tony-Winning Revival of ‘Company’ to Close on Broadway Next Month, Tour in the Works