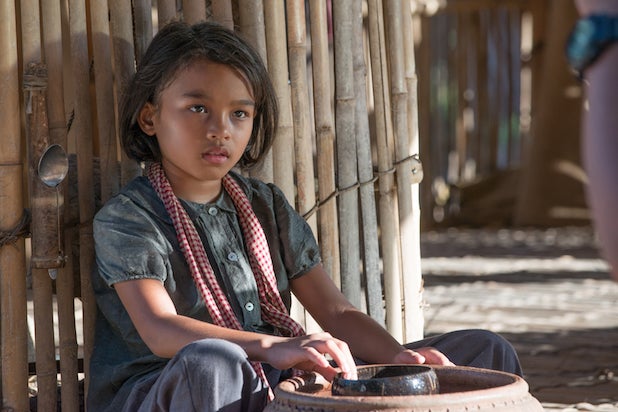 Angelina Jolie won an Oscar for “Girl, Interrupted” in 2000 and was given the Academy’s Jean Hersholt Humanitarian Award in 2013, but she could be back in the Oscar race this year in an unusual position: as director of one of the films competing for Best Foreign Language Film.

Jolie’s upcoming “First They Killed My Father” is a Netflix production set in Cambodia during the Khmer Rouge’s destructive reign in that country. It was filmed in Cambodia with an entirely Cambodian cast, and not a word of dialogue is in English.

The film enjoyed an emotional and well-received premiere last weekend at the Telluride Film Festival, where Netflix’s Ted Sarandos said that he expected it to be the official Cambodian submission in the Oscars’ foreign-language category.

That would put Jolie in the unusual position of representing a foreign country in the race. But her film’s acceptance by the Academy is not guaranteed; films have been disqualified in the past if they have insufficient creative control from the submitting country.

“First They Killed My Father: A Daughter of Cambodia Remembers” is based on the autobiographical book of the same name by Loung Ung, who shares screenplay credit with Jolie.

It was produced by Jolie and Rithy Panh, a Cambodian director whose “The Missing Picture” landed an Oscar nomination for that country in 2014.

Different bodies from nearly 100 countries are deputized by the Academy to submit a single film to the Oscar race. Once a film is submitted, the Academy’s Foreign Language Film Award Executive Committee determines if it qualifies under AMPAS rules that specify that “creative control of the motion picture was largely in the hands of citizens or residents of that country.”

In the past, the Academy has disqualified China’s entry of French director Jean-Jacques Annaud’s “Wolf Totem” and Albania’s submission of “The Forgiveness of Blood” from American-born director Joshua Marston, among others.

Panh’s role as producer of “First They Killed My Father” will help establish Cambodian creative input, as will Loung Ung’s screenplay credit.

In addition, although Jolie was born in the United States, she was granted Cambodian citizenship by royal decree in 2005, because of her humanitarian work in the country.

But the film’s cinematographer, composer, editors and other department heads are not Cambodian, which could cause the AMPAS committee to examine its submission closely.

Even if the film does not qualify in the foreign-language category, though, its U.S. upcoming release would make it eligible in other categories.

And the reviews out of Telluride have for the most part been raves, acclaiming it as Jolie’s best work as director.

This is not the first time that Jolie has directed a film in a foreign language. Her 2011 drama “In the Land of Blood and Honey” was set during the Bosnian War and was filmed in two versions, one in English and one in Serbo-Croatian.

The latter version was nominated by the Hollywood Foreign Press Association for the Golden Globe for Best Foreign Language Film.