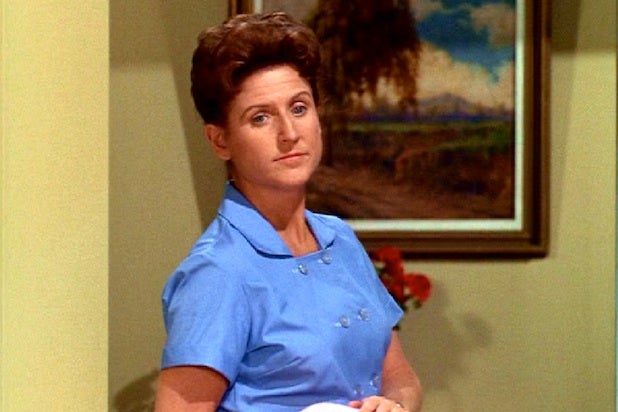 Hollywood is expressing its sadness and remembering Ann B. Davis, who played the iconic housekeeper, Alice, on “The Brady Bunch.”

The actress died in San Antonio, Texas at 88 years old. She had fallen in her bathroom on Saturday evening, suffered a subdural hematoma and died a day later at a local hospital.

“I’m shocked and saddened ! I’ve lost a wonderful friend and colleague,” she said in a statement.

Although the show about a blended family aired during the late 60’s to mid-70’s, the series aired in repeats for years to become a cult favorite.

Best known for “The Brady Bunch,” Davis’s entertainment career started at age six. She performed in theater, traveling companies and on the TV programs “The John Forsythe Show” and “The Bob Cummings Show.”

The mourners span Hollywood from actors and actresses to producers and journalists.

See how Hollywood is remembering Davis below.

RIP Ann B Davis. I hope you and Sam the butcher are enjoying a filet mignon in the great beyond.

I grew up wanting to be Marcia Brady but with 4 kids, I turned into Alice the Maid. RIP Ann B. Davis. pic.twitter.com/SJCdLA289Z

happy to hear that Ann B. Davis was still alive! then sad to hear she died. double edge sword there. #RIP #SamTheButcher #Alice #Tiger

Ann B Davis. How many mornings I have spent with you. " oh Alice". RIP

Before Alice, she was Shultzy. RIP great comic actress Ann B Davis. http://t.co/ev3LJruLUC

RIP Ann B. Davis aka ALICE from #BradyBunch #televisionicon

Good bye alice!!!! You will be missed. RIP Ann B. Davis

#breaking A sad loss — Ann B. Davis — who played Alice on the Brady Bunch has died at 88. Everyone loved Alice.

I had the privilege of knowing Ann B. Davis, who died this morning at 88. A great actress & a woman devoted to Jesus. pic.twitter.com/KF7iEHwqQ9