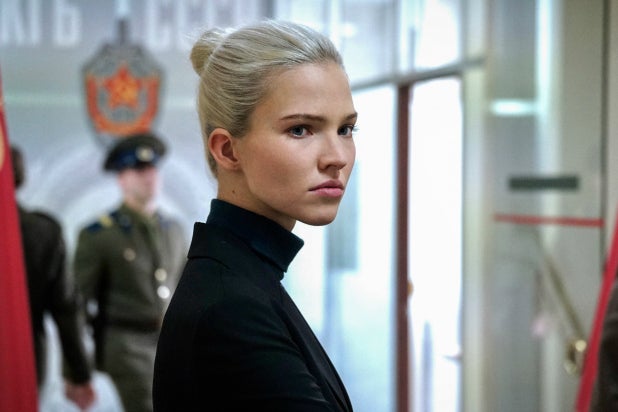 “Anna,” the new thriller about a supermodel who’s also a Russian assassin, is a film with many, many wigs. Long wigs, short wigs, red wigs, silver wigs. The film’s star, Sasha Luss, wears so many wigs throughout this movie that you may very well delight in counting them all. It’s probably the most entertainment you’ll get out of this flimsy “La Femme Nikita” knockoff.

Writer-director Luc Besson, who also wrote and directed “La Femme Nikita” almost 30 years ago, once again tells the story of a troubled young woman, addicted to drugs and incredibly violent, who gets pulled into the world of espionage after a robbery gone wrong, by an agent with whom she forms a romantic attraction. Once again, her first assignment is a dangerous hit that takes place in a crowded restaurant, which goes completely awry on purpose, and once again, she discovers that the life of a professional assassin kinda sucks and she’d really rather be out of it.

The list of similarities goes on and on. Besson has added some modeling montages and “gotcha” plot twists, most of which are rather obvious after he establishes a flashback structure — where, every time something happens off-camera, it means we’ll soon find out something important happened off-camera — but watching “Anna” brings with it a profound sense of déjà vu. If only anything else about it was profound.

Huss plays the title character who, in the film’s opening, gets recruited by a fancy Parisian modeling agency and taken away from her farmers market stand, where she sells Russian dolls. (Get it? She’s got layers.) Anna gets a makeover, moves in with a dozen other prospective supermodels and begins to romance a high-profile importer-exporter, who naturally is more important to her “other” career than he is to her glossy photoshoots.

Through a series of flashbacks, we see Anna’s origin. She’s recruited by handsome handler Alex (Luke Evans) and trained by the bespectacled Olga (Helen Mirren), who is basically the Russian government’s Edna Mode. Olga suffers no fools, to the extent that she seems ready to jump out of the screen, walk into another theater and jump into something more worthy of her talent than an action movie that forces Helen Mirren to spend most of the time behind a desk or in the back seat of a limousine.

Eventually, Anna discovers that being a Cold War super-assassin isn’t all it’s cracked up to be, but by then she’s been targeted by an American CIA agent, Lenny (Cillian Murphy), who has his own plans for her career. The plot gets a little complicated, but only to hide the film’s raison d’être, which is to show Sasha Luss in various wigs and elaborate lingerie ensembles, killing a whole a bunch of people and looking icy as hell while doing so.

The story’s sexual politics are only slightly less disturbing than those of “Red Sparrow,” although it still takes place in a world so overloaded with superficial standards of beauty that the regal Helen Mirren, of all people, gets called out for being ugly. This is a movie about a woman weaponizing her beauty and her body, and Besson and his cinematographer Thierry Arbogast (“Valerian and the City of a Thousand Planets”) miss no opportunity to fetishize her. If one is aware of the many accusations surrounding Luc Besson, the subtext is so inescapable that it essentially becomes text. In the #MeToo era, especially coming as it does from a director like Besson, the whole film comes across as exceptionally tone-deaf.

Even if you can appreciate the film on its own merits, you’ll find relatively little to grab you. The only time “Anna” explodes, in a good way, is during the centerpiece restaurant action sequence, where Anna dual-wields broken plates to slice the throats of (presumably) bad guys, and somehow discovers a brand new way to twist a man’s neck all the way around. It’s a satisfying, bloody bit of carnage and Luss makes it look cathartic, as though she’d been waiting to kill a room full of men since she started this project and only just now got to cut loose.

Then again, that scene comes after the better/worse part of an hour, and by action movie standards, the choreography is still sub-“Atomic Blonde.” Besson’s film feels like a relic by most modern standards: It’s a formulaic thriller from a director who invented this very specific formula, and just about all it’s good for is introducing audiences to Sasha Luss, who carries the film with elegant strength and unleashes a satisfying fury whenever she’s allowed to destroy or humiliate her oppressors, or any of the myriad faceless antagonists who get shot in the face over the course of “Anna,” all of whom no doubt thought — in their very last second of consciousness — “That’s a very nice wig.”