Anne Heche is in “extreme critical condition” following a fiery car crash, a representative for the actress said Monday, a grave update after saying over the weekend that she had been stabilized.

“At this time Anne is in extreme critical condition,” the unnamed rep told Deadline. “She has a significant pulmonary injury requiring mechanical ventilation and burns that require surgical intervention. She is in a coma and has not regained consciousness since shortly after the accident.”

Heche crashed her car Friday into a home in the west Los Angeles neighborhood of Mar Vista at such a speed that she nearly blew through to the back of the house. The impact set the structure ablaze and pinned Heche inside for several minutes before the Mini Cooper was pulled out with a giant LAFD crane. 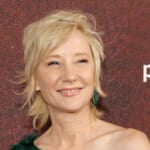 Following the crash, TMZ reported that the “Six Days, Seven Nights” actress was hospitalized with severe burns. As of Friday afternoon, a representative for Heche released a statement that said Heche was in stable condition and asked for privacy.

A representative for Heche did not immediately respond to TheWrap’s request for comment.