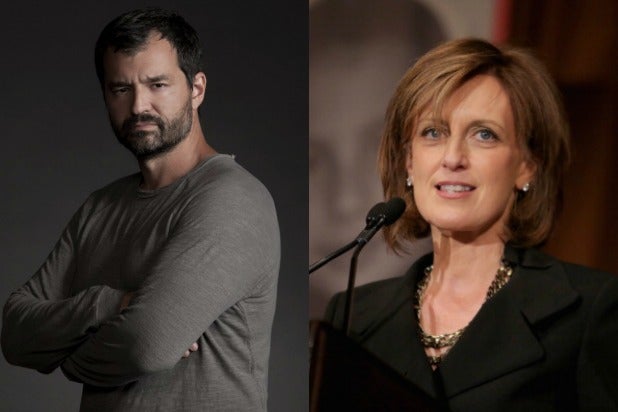 Anne Sweeney wants to shadow TV directors as she transitions into directing, and she has at least one solid offer.

Greg Yaitanes, the “Banshee” executive producer and Emmy winner for his direction on “House,” says Sweeney is more than welcome on his set as she moves into directing and leaves her job as president of Disney/ABC Television Group.

“Anne Sweeney has an open door to come shadow at ‘Banshee’ if she wants,” he told TheWrap on Thursday.

Yaitanes has directed many ABC shows – from “Lost” to “Grey’s Anatomy” – but hasn’t met Sweeney personally. We noted that some younger directors might wonder if Sweeney, who is 56, could transition into directing without her wealth of industry contacts.

“I often tell young people not to be concerned with what other people are doing,” said Yaitanes. “There’s a great quote from ‘The Sopranos.’ Tony Soprano says, ‘There’s plenty of garbage for everybody.'”

“You have to look at Anne Sweeney as someone who has fostered an enormous amount of talent, and enormous amount of success,” he added. “And anybody scratching their head wondering, would she get there without her connections, well, it’s quite the opposite: Would all those other people and all those other directors have succeeded without her guidance?”

Besides being a director, Yaitanes is an investor in Twitter and other companies who is known for applying business principles to running shows. (Click here to read about his “one olive” principle.) Yaitanes said Sweeney’s business acumen could make her an excellent director.

Greg Yaitanes: Absolutely. I always feel like when I’m running a show I’m the accidental CEO. I came into the job as a director, but especially transitioning into producing, I find that I’m suddenly running a company. So somebody coming in with great management skills is a tremendous asset.

I’d love to see more directors and more producers learn more about management. Because as much as you’re driving the creative process, you’re also running a company with 200 people with the crew of any TV show. Understanding getting the best out of people, understanding what management actually is, is a phenomenal asset. If she can match that with the creativity that she has as an [executive], she’ll be a pretty powerful force in TV directing.

Does the transition make sense?
I applaud why she’s doing it. When you have a calling to the creative process and you’ve accomplished what you’ve accomplished, that’s phenomenal that she’s willing to reinvent herself. And that she wants to shadow and learn the process. She’s not coming into it thinking that she already has everything figured out. She’s very open to learning, and I think that’s also a tremendous asset. Knowing what you don’t know is such a rare skill in this business.

And the fact that she’s willing to learn and has so many great people to mentor her also has a larger message about the importance of mentorship in our business. We have a responsibility as filmmakers and storytellers to pass that on to the next generation.

And I do feel that women are underrepresented as directors. And I love seeing that grow.

The Season 2 finale of “Banshee” airs Friday on Cinemax.