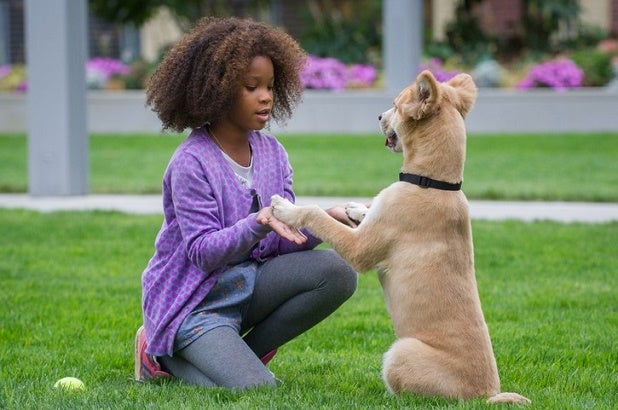 “Annie” reviews are in, and they’re more bad news for Sony Pictures Entertainment, which has been plagued by privacy, legal and publicity problems since a hacker group calling themselves Guardians of Peace paralyzed the studio nearly a month ago.

The family film, starring Quvenzhané Wallis as the eponymous little orphan and written, directed and produced by Will Gluck (“Easy A”), has garnered mostly negative reactions from critics counted on Rotten Tomatoes. So far, it stands at a 20 percent “rotten” rating, with only six positive reviews.

TheWrap‘s Inkoo Kang is one of the film’s more forgiving critics.

“No amount of self-referential jokes can make up for a lack of heart and spirit, and thankfully, “Annie” lacks neither,” Kang wrote in her review. “Wallis is only passable as an actress and a singer here — a fact the film seems to acknowledge by drowning out her vocal performances with thudding musical arrangements. Byrne is ever winsome in an undemanding role shaded by layers of loneliness.”

So what was everyone else’s problem with the “Annie” remake costarring Jamie Foxx, Rose Byrne, Cameron Diaz and Bobby Cannavale? Take a look at some of the harshest reviews to find out:

“It’s a good thing that little girls of many colors can find some version of themselves in the multiracial cast of this musical reboot. But Broadway purists determined to hate ‘Annie’ need not fear, because there’s plenty worth complaining about. The adult cast is agreeable at best. Any scene without Wallis and her gang of remarkably symmetrical, well-groomed orphans feels like a chore — ‘Let’s just get through this,’ the movie seems to be saying, ‘Then we’ll show you that cute little girl and her puppy again.'”

“Musically, ‘Annie’ is a disaster. The melodious original score by Charles Strouse and Martin Charnin gets the full-on Autotune pap treatment, which takes to these songs about as well as a lute to death metal. You won’t ever hear a worse rendition of ”Easy Street’ than the one performed by Diaz and Cannivale — I promise. (The Sia-branded new songs feel much more at home.) One can only hope that Byrne, Diaz, and Cannavale had ”movie musical” on their bucket lists and will never tarnish their talents in such a way again. Aside from an unintentional homage to ‘Zoolander’ that is so tone-deaf it’ll make you guffaw, ‘Annie’ goes out of its way to make viewing it a hard-knock life … for us.”

“For all the talent involved, the overall effect is surprisingly flat. Foxx appears disconnected, Byrne is wasted and a painfully hammy Diaz seems to be in another movie altogether. The awkward choreography is also disappointing. But the strangest mistake is the music, which has been blandly retooled for a new generation. Surely a film produced by Jay Z and Will Smith could have offered better updates on songs like ‘It’s the Hard Knock Life.'”

“‘Annie’ was a chore to watch in 1982, and it’s not much better now. Both movies were based on the 1977 Broadway musical about an adorable orphan girl who melts the heart of a high-powered industrialist, although this new version uses fewer than half of the songs from the original production. The songs that remain get updated lyrics and overstuffed, percussion-heavy modern production that doesn’t do them any favors. It also doesn’t help that none of the main performers is a particularly good singer.”

“‘Annie’s’ flimsy plot soon loses all coherence, which given its storied history is frankly unforgivable once a romantic plot between Stacks and Rose Byrne’s Grace Farrell is shoehorned in, and the laughable conclusion is so contrived that literally zero tension or intrigue is created. ‘Annie’s’ most damning flaw, though, is the lack of energy, originality or panache in its musical numbers.”

“Think you’ve got a hard-knock life? Try sitting through the new ‘Annie.’ A rewritten, re-orchestrated but far from revitalized version of the old Broadway musical.”

“I don’t care about fidelity to the original, but I do care that the new ‘Annie’ mistakes dithering for choreography and cynicism for wised-up charm. Is this story really the place for lines such as: ‘People shouldn’t be scared of governments; they should be scared of cellphone companies’? Huh? Wha? The overall vibe of this folly is curdled and utterly blase; it’s a 118-minute foregone conclusion, finesse-free and perilously low on the simple performance pleasures we look for in any musical, of any period.”

“Bet your bottom dollar that girls of all ages have a special connection with the movie-musical about an orphaned girl and the man who makes her dreams come true. The 2014 remake of 1982’s ‘Annie,’ originally based on the classic Broadway musical, fails to honor that special connection. Co-producers Will Smith and Jay Z shook it up and turned it into a slick, out-of-tune miss that’s desperately aching to be hip.”

“The best that can be said of this new version is that Will Gluck and company have certainly made the story, and most of the songs, their own. But, aside from originality points, this new ‘Annie’ is a charmless and grossly materialistic bore, especially for now-adults of a certain age who still hold the ’82 version in high regard.”