Monday’s explanation of how the votes are counted and Oscar nominations are determined raised lots of questions, which is hardly surprising: it’s a difficult process to grasp, and an even more difficult one to explain.

And when you think you have it straight, they throw another complication at you: magic numbers that change! The surplus rule!

So this will be an attempt to answer a few of the questions asked by readers of theWrap, and by some folks on other sites that linked to or summarized the story.

And if, in the process of trying to provide some answers, I make the whole thing sound even more confusing … well, welcome to the wonderful world of Oscar ballot counting. 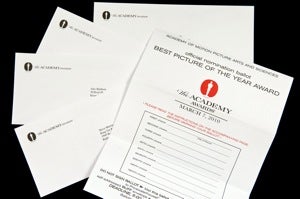 First, a Wrap reader who goes by Gnosis wanted a few of the wrinkles explained:

“In your simulation, where 500 votes are required, it is also possible that 55 films could receive 100 votes each and there are no first round winners. That is clearly unlikely but it seems VERY likely that no film could come out of the first round, and so I assume that the lowest #1 vote getter might get reassigned right out of the gate.”

So yes, the films with the fewest number one votes will likely be eliminated, and their votes reassigned, in many cases before any nominations have been secured.

“Of course, it is also possible that many of those initially reassigned votes might have NONE of the #1s on the rest of its list – just check some of the critics who disdain all mainstream films. I assume that the critical number is lowered as we go.”

Again, yes. Eventually, some ballots will have to be discarded, because they won’t contain the names of any eligible films. And as those ballots are discarded, they do lower the number required to secure a nomination.

Over at Hollywood-Elsewhere, Jeff Wells has a bout of wishful thinking:

“To a guy who’s always had trouble with numbers, this seems to mean that if ‘Precious’ doesn’t end up with 501 Academy members (i.e., one tenth of the membership plus one) listing it as their top Best Picture choice, it won’t emerge as one of the ten finalists.”

“It’s theoretically possible that ‘Avatar,’ ‘The Hurt Locker’ and ‘Up In The Air’ might be listed as the #1 Best Picture choice on, let’s say, 4,500 Academy ballots. That would mean that remaining choices on these 4,500 ballots won’t mean squat, right?”

“That would leave 1,000 more ballots from which seven other Best Picture nominees would need to be chosen. This means that these seven would have to appear as #1 Best Picture choices on only 142 ballots, right?”

Wrong. Sorry to complicate things, but if 4,500 first-place votes are split between only three movies, then the surplus rule will kick in big time, and all of those 4,500 ballots will be redistributed, counting as whatever fraction of each vote wasn’t needed by the original film. You can refer back to the original piece for a brief explanation of the surplus rule – but if you’ve “always had trouble with numbers,” it might make your head explode.

One of Wells’ readers, adorian, poses a theoretical question:

“So let’s say that I know Meryl Streep is going to be nominated, but I’m afraid Tilda Swinton is not. I need to vote for Tilda as #1 and Meryl as #2. But in the counting, it turns out only 3 of us voted for Tilda for #1, so she gets eliminated completely and my vote for Meryl as #2 gets changed to a vote for Meryl as #1?”

If you’re out, you’re out. Once you’ve been eliminated, either because you didn’t get any first-place votes or because you had the fewest votes of any remaining contender after the end of a round, no number of second- or third-place votes will bring you back into the race.

“I’m now curious as to what the voting system was the last time AMPAS nominated 10 films for BP.”

It was exactly the same as it is today.

Random75 looks at my hypothetical example in which 501 votes were needed to secure a best-picture nomination, and “Up in the Air” got 575 on the first ballot. His (or her) question:

“So if I’m one of those random 75 that went over 500 to vote for ‘Up in the Air,’ my votes get lumped in with the rest of them never to be heard from again?”

In a manner of speaking, yes. But who’s to say you didn’t cast one of the 501 votes that won the film its nomination, rather than one of the 74 superfluous votes? You can’t really distinguish between the two groups. The point is, you voted for a film that got nominated, and it seems churlish to complain that 13 percent of that vote was wasted.

And Hans quotes my piece – “ … theoretically, it avoids the problems that can arise in a typical weighted system, in which your first choice gets 10 points, your second choice nine, etc.” – and counters:

“What problems? It seems like a weighted system would be fairly simple. Could someone explain this to me?”

Say you feel that Viggo Mortensen gave by far the best performance of the year, followed, in order, by Jeremy Renner, Jeff Bridges and George Clooney. But you think that Mortensen and Renner are going to be battling for that fifth best-actor slot – and what happens if, by the time they come to count your vote, Mortensen has 298 points while Renner has 300? Sure, you put Viggo at the top of your ballot, which gives him five points – but Jeremy is second, which gives him four and keeps him ahead of your real favorite. So you might start playing games, and drop Renner down to number five on your ballot. Or you might leave him off entirely, so that he can’t hurt your boy Viggo.

Under preferential voting, you wouldn’t have to do that. Renner, your number two choice, would only get your vote if Mortensen, your number one, didn’t need your vote, either because he’d already secured a nomination or because he’d been eliminated. Your vote will always go to the highest-ranked person on your ballot who can actually use the vote.

Back at H-E, Gordon27 correctly answers some of Jeff Wells’ questions himself, then reaches a conclusion:

“which brings up the point that the people who count this could very easily control the outcome to some extent. They can’t control the votes, but they can control which votes are counted for which movie.”

Actually, they can’t. There is no discretion involved. The films with the fewest votes are eliminated at the end of each round, and their votes automatically go to the highest-ranked film that’s still eligible on each ballot. Once you decide how many nominations you’re going to have, you can count the ballots in any order you want, because there can only be one outcome.

Among other commenters who didn’t have questions, my favorite explanation of the process came from one “Irving Thalberg” at Hollywood-Elsewhere:

“Put another way, each person only gets one vote and in an ideal world, their #1 film would collect that vote but as some of those films are eliminated from the possibility of being nominated, those ballots begin an automatic runoff so that the accountants don’t have to call voters up and say, ‘JULIE & JULIA didn’t make it into the top ten, dude. What do you want to vote for now?’"

Then again, Andre has a damn good point at In Contention:

“This reads like the rules of WhackBat from ‘Fantastic Mr. Fox.’”