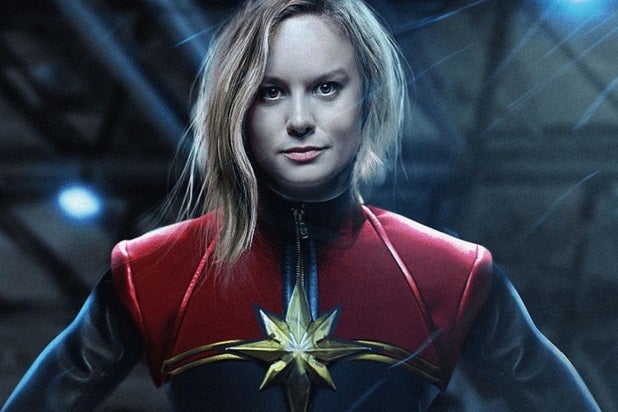 (Note: This post contains spoilers for the end of “Ant-Man and the Wasp” and “Avengers: Infinity War.” Just FYI.)

We expected, after seeing “Avengers: Infinity War” back in April, that both “Ant-Man and the Wasp” and “Captain Marvel” would play into the story being told across “Infinity War” and next year’s “Avengers 4.” That seemed self-evident — Marvel surely would not put those two movies in between those “Avengers” films if they weren’t important.

But what we did not expect is that “Ant-Man and the Wasp” and “Captain Marvel” might interact directly with each other.

This is just guesswork right now, but a very conspicuous line from the mid-credits scene in “Ant-Man and the Wasp” definitely sets up the possibility that Ant-Man himself will manage to show up in “Captain Marvel” even though that film is set decades before Scott Lang (Paul Rudd) ever donned the Ant-Man suit.

That line comes courtesy of Janet van Dyne (Michelle Pfeiffer), who casually drops a warning for Scott just before he returns to the Quantum Realm: “Don’t get sucked into a time vortex.”

That’s an absolutely crazy concept to bring up for the first time in that moment — it’s just seconds before Janet, Hope (Evangeline Lilly) and Hank Pym (Michael Douglas) fall victim to the finger snap Thanos (Josh Brolin) used to eliminate half the life in the universe in “Infinity War,” which maroons Scott in the Quantum Realm. How will Scott get back to the normal world? Well, maybe by getting sucked into a time vortex.

Also Read: 'Ant-Man and the Wasp' May Have Just Set Up These 'Avengers 4' Time Travel Plots

Of course, we have no idea how a time vortex would even work or what it entails. But if we want to go with the idea that getting sucked into one might dump him out in the normal world at both an unknown time and place, the time when and a place where the events of “Captain Marvel” happen is as natural a landing spot as any.

We should qualify this by pointing that it’s unlikely that Ant-Man will have a major part to play in “Captain Marvel” because we would probably know if Paul Rudd had been spending a lot of time on that film’s set. Marvel has been really good about keeping things under wraps on “Avengers 4,” but even before we saw “Ant-Man and the Wasp,” we were thinking about MCU time travel because leaked “Avengers 4” set photos seemed to show our heroes revisiting past MCU battles — with characters who weren’t present the first time around. So if Rudd — or, say, a stuntman wearing the Ant-Man suit — had spent a month on the “Captain Marvel” set, it probably would have leaked.

So, if Scott Lang does pop up, it would more likely be as a cameo, maybe as part of a mid-credits stinger leading into “Avengers 4.” Marvel is certainly adept at keeping that kind of thing a secret — we had no clue, for example, that Red Skull was going to appear in “Infinity War.”

Also Read: 'Ant-Man and the Wasp' Mid-Credits Scene Explained: What Is a Time Vortex?

Regardless, the clue makes some story sense as the threads of “Ant-Man and the Wasp” converge with “Infinity War.” Given that “Infinity War” and “Avengers 4” are a culmination of everything that’s happened in the MCU up to this point, Ant-Man’s absence from the proceedings so far has been conspicuous. Releasing “Ant-Man and the Wasp” between the two “Avengers” films suggests that Ant-Man’s part to play will be important to the conclusion of the Thanos story, and that almost definitely means it’ll be part of reversing the effects of Thanos’ finger snap.

Leaving Scott in the Quantum Realm on a cliffhanger is like a big neon sign to audiences that Scott’s predicament will be essential to “Avengers 4.” And the post-credits scene of “Infinity War” in which Nick Fury (Samuel L. Jackson) contacted Carol Danvers (Brie Larson) similarly shows the extreme importance of the events of that movie.

The question is, what will Ant-Man’s role be in “Captain Marvel?” Scott was lost in the Quantum Realm when Hank, Hope and Janet disappeared thanks to Thanos’ actions, but Scott never actually saw that happen — so as far as we know, he doesn’t actually know about it. That means, at least right now, that Scott can’t tip off Carol about Thanos in the future, which seems like it would be a logical role for a time-traveling hero to fill. Still, Ant-Man’s appearance in the 1990s could provide him a way to get rescued from the Quantum Realm back in 2018.

Then again, maybe it’s Captain Marvel who could provide key information to Ant-Man to take back to the future with him. Carol got her powers from an alien named Mar-Vell, played in “Captain Marvel” by Jude Law, and in the comics, Mar-Vell has been standing in Thanos’ way for a while. It could be that Carol will send Ant-Man back to the future with an inside scoop that could help deal with the Thanos situation while the heroes wait for her to arrive on the scene.

Or maybe this is a completely wrong guess and the time travel shenanigans we’re assuming Ant-Man is about to go on will skip over “Captain Marvel” entirely. At the very least, we’ll find out in March 2019.