Anthony Hopkins’ new film “Zero Contact” is set to premiere as an NFT on a new global NFT distribution and viewing platform called Vuele, it was announced on Wednesday.

Vuele is a recently launched direct-to-consumer NFT platform, and “Zero Contact” marks the company’s first feature film acquisition. Users can become owners of exclusive, limited editions of films and collector NFT content which they can watch, collect, sell or trade on the platform.

“Zero Contact” was virtually produced in 17 territories during the COVID-19 pandemic last year. The thriller follows five characters based all over the world who are only connected by their devotion to the late tech titan Finley Hart (Hopkins). They are forced to work together to shut down his most secret invention — a machine that is either the answer to mankind’s problem, or the end of life on Earth. 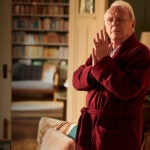 “Everything about this film is unconventional, from the way we shot the film using Zoom and remote production to its distribution on the first global NFT platform,” producer Rick Dugdale, who also makes his directorial debut with the film, said in a statement. “We’re thrilled to bring a film of this magnitude with the star power of Anthony Hopkins as our first release on VUELE.”