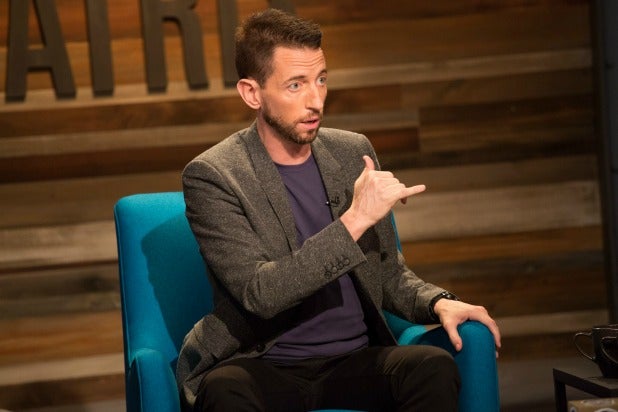 Neal Brennan’s new series “The Approval Matrix” takes the most highbrow, brilliant infographic ever to appear in a magazine and uses it as a springboard to talk about television, internet scolds, and his favorite subject, race in America.

The co-creator of “Chappelle’s Show” is also a standup comic, writer and director of films like “The Goods” and shows including “Inside Amy Schumer.” But his most celebrated work is his collaboration with Dave Chappelle, including sketches that focused on the most uncomfortable questions about racial dynamics.

He’s become something of a bridge between white and black culture: “The Champs,” his podcast with Moshe Kasher, features the two white comedians talking primarily with black guests. With “The Approval Matrix,” he continues to examine whether our society condemns obvious bigotry while ignoring more pervasive, systematic discrimination.

Our talk was pretty wide-ranging, but so is “The Approval Matrix.” Brennan talked about Donald Sterling, reparations and why he considers the N-word unavoidable in his comedy.

TheWrap: Your publicist mentioned you taking the subway. I feel like if I’d co-created “Chappelle’s Show” I’d never take the subway.
Neal Brennan: Everyone has this idea of what they would do if they created “Chappelle’s Show.” Like, “Man, I would never do standup, I’d just hang out with models.” Couple things: I take the subway because it’s A) quicker and B) I get carsick. Even in my Bentley! Kidding. And models aren’t that into guys who write sketches. Me and Seth Meyers always used to do a joke like 10 years ago where we’d go up to girls in clubs like, “Hey, y’all like skits?”

Also read: How Obama Made Fun of Dave Chappelle — According to Neal Brennan (Video)

You’ve taken New York magazine’s Approval Matrix your own thing. The show isn’t just you and some guests rating Justin Bieber.
I wouldn’t have wanted to do that. I find shows like that kind of pitiful, honestly. I just wouldn’t have been the right guy. … We all tried to make it substantive. I think that’s the nice thing about doing it on Sundance. There’s no lowest common denominator.

In one of the first episodes, you make a nuanced point about Donald Sterling. While you don’t agree with what he’s said in any way, you do believe in his right to believe what he wants, in his own home, and not be taped. You’re putting privacy above anti-racism.
Yeah! Yeah! I stand by that. Were you not surprised by what Jon Stewart said about that?

What he says on “The Approval Matrix,” as I understood it, is that you can say what you want, but you shouldn’t be surprised that someone might record you and that there might be consequences.
But in your house? I feel like Jon was saying the end justifies the means, and I don’t think it does. I kind of don’t think it does. … I actually asked Jon, but we cut it out of the show: Do you not say fucked up stuff in your house? And he goes, ‘I say fucked up stuff all the time, but it’s around my friends.’ And what I wish I’d said was, what if the Koch brothers taped one of your friends?

He shouldn’t own the Clippers. Everyone knew he was a piece of garbage. But you know what it is? It’s basically getting Al Capone on tax evasion. It’s like they couldn’t get him for the housing discrimination thing, because it was settled. But they could get him on this.

If you’re grandparents aren’t allowed to buy a home, you’re at a huge disadvantage.
The people who set up the redlining were the government. That’s pretty significant… Bomani Jones also appeared on ESPN and wrote a really, really, really unbelievable piece about housing discrimination.

What did you think about Coates’ argument for reparations?
Yeah, I absolutely agree with reparations. How to institute them is a different thing. … It’s one of those things that’s really, really hard to implement, if not impossible.

Along those lines, when you take a nuanced stand on something like Donald Sterling — not endorsing him, but endorsing privacy — that gets dumbed down to ‘Brennan defends Donald Sterling.’
If they want to come and get me, they can get me on every episode. I can walk you through the ways they can get me on the first show. I’m not going to, because I don’t want you to get me.

But there’s a difference between getting tweeted at or harassed by someone you respect and someone you don’t. If someone says a ridiculous thing, can’t you brush it off?
Yeah. I get tweeted something disrespectful pretty much every day. Someone will tweet something about Dave and how I screwed Dave over or Dave was right or I have no talent without Dave. I used to forward things to Chappelle and finally he was like, ‘What is wrong with these people?’ I couldn’t answer his question.

I said something on one of the first shows and I was talking to somebody and said, ‘Do you think so-and-so is going to get upset with me?’ And he said, well, maybe, but that’s what you get for being the guy that says what everyone’s saying. Maybe there is a tax on speaking your mind.

You’ve done a podcast that runs for at least an hour for years, and haven’t gotten caught on anything you’ve said yet.
I always worry about somebody scrubbing them, looking for evidence. I’m always thinking about the Republican dirty tricks committee taking me down. I’m kidding and I’m not kidding. That’s the sucky part about being or at least attempting to be in public life now. Almost every tweet, I scrub it for possible misinterpretations.

But if you ever ran for office, you’d be done in a day because you’ve used the N-word in your standup. And I know you use it in your routines in a particular way, and it’s about the power of the word and the problems with the word. You’re not using it gleefully.
I’m in a tough position on the N-word. I know that that’s a very entitled thing to say. I’m in an interesting position. I’m called it or texted it every day, by one of my black friends. And I am known for doing comedy around it. The N-word for me, I’m almost like a plumber who can’t call a wrench a wrench. I have to call it the W-word.