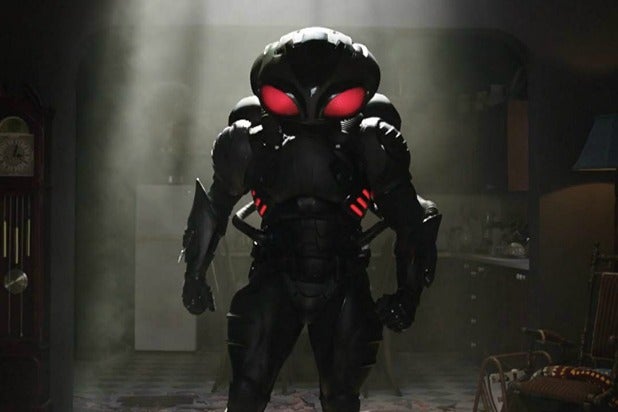 (Spoilers ahead for the mid-credits scene from “Aquaman.” You have been warned.)

So here we are, finally, getting the first new film based on a DC Comics property since the maligned “Justice League.” But while “Aquaman” does briefly acknowledge that the events of that movie happened, it otherwise is actually kind of a soft reboot of this whole thing, otherwise totally divorced from the Zack Snyder era of DC movies.

That divorce even includes something the Snyder films and “Wonder Woman” famously eschewed: a mid-credits teaser.

The scene, which comes about 5 minutes into the credits, reveals that Black Manta survived his battle with Aquaman (Jason Momoa), and introduces a new villain — Dr. Stephen Shin, played by Randall Park.

Also Read: Does 'Aquaman' Connect to 2017's 'Justice League' or Just Ignore It?

When we last saw Black Manta (Yahya Abdul-Mateen II) in the film proper, he was in a bad spot. Attempting to assassinate Aquaman in Sicily, he gets his ass kicked instead and in the process accidentally explodes his experimental plasma beam-shooting helmet. Aquaman then tosses Black Manta against a jagged cliff wall and he tumbles into the ocean to an uncertain fate.

Cut to the mid-credits scene, where we find him barely conscious, still wearing his badly damaged black armor, and floating on a piece of driftwood somewhere in the Mediterranean sea. He’s quickly rescued by a passing boat and wakes up sometime later on a bed in a crowded room where, on the TV, he sees a cable news show panel talking about the the crazy underwater battle from the climax of the film.

On the panel is Dr. Shin, who is extremely alarmist about the threat posed by Atlantis. We’d seen him earlier in the film on the same show, being mocked for believing Atlantis exists and this time is no different. The other panelists scoff at Shin’s rhetoric, but Shin insists he’s right, noting the intense seismic activity that the battle caused.

Manta, who has bandages over his right eye suggesting he might have been half-blinded when his helmet blew up,  wakes fully to find out it was actually Shin who rescued him. Shin is sitting at a desk in the room, tinkering with Manta’s helmet and barely dodges when the helmet emits a blast of plasma that burns a hole in the wall behind him.

Shin then excitedly asks Manta about his Atlantean armor and for information about Atlantis. Manta says he’s happy to oblige, if Shin will help him get a shot at revenge against Aquaman.

The inclusion of Dr. Shin here is fascinating, as he’s a relatively minor character in the comics — he’s appeared in only 27 issues since his introduction in 2011. Like in the movie, the comics version of Dr. Shin is an expert on Atlantis who views the underwater civilization as a threat — though he isn’t one to take any kind of major direct action. He did, however, try to kill Aquaman once.

If Shin is teaming up with Black Manta, there’s a very good chance he’ll be getting a promotion of sorts in “Aquaman 2.” The fact that he’s played by someone like Randall Park means there’s a good chance that Dr. Shin will be the main big bad of the sequel.

That doesn’t mean Black Manta will take a backseat — Manta is one of Aquaman’s chief nemeses in the comics and will likely feature even more prominently in the sequel than he did in this one. Think a teamup between Shin and Manta, with Shin as the brains and Manta as the muscle.

But since the source material doesn’t give us much to go on about Dr. Shin, it’s tough to guess what he might do as the main antagonist of a movie. Which is actually pretty cool!

So that’s something to look forward to, should “Aquaman” do well enough over the holidays to warrant a sequel greenlight. Here’s hoping that if they do get one going that they’ll bring back James Wan to direct again.

Meanwhile, this isn’t the first time DC has given fans a credits scene. Joss Whedon’s revamped “Justice League” had one too. But that was the first time for this particular shared franchise — previous DC films didn’t have them mainly because Zack Snyder wanted to avoid being accused of copying Marvel —  so it was hard to tell if that represented a change in standard practice for these movies.

We still don’t know for sure if these two instances make a  pattern, of course. We’ll have to wait for “Shazam!” on April 5 to see.