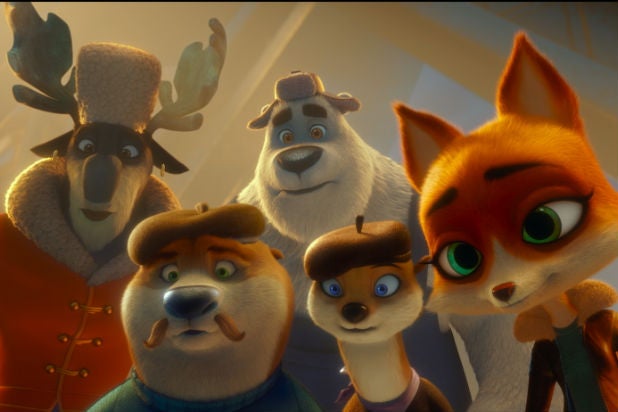 If you’ve been frantically sending letters to animation studios, begging them to make a kid-friendly CG-animated movie about the dangers of fracking and walruses, then “Arctic Dogs” is the extremely specific movie for you. Nobody else needs to buy a ticket, because although this film is hardly the worst of the year, it’s about as insubstantial as a tiny handful of snow.

Jeremy Renner lends his voice to Swifty, an anthropomorphic Arctic Fox who lives in the faraway, icy town of Taigasville. Arctic Foxes are bright white and disappear almost entirely into the snow, so nobody ever seems to notice him. He dreams of one day joining the “Top Dog” delivery service, on which the town’s entire economy depends, and which has elevated heroic huskies Duke, Dakota and Dusty into local celebrities.

Years go by, and Swifty finds a job working for the service, on the conveyor belt, with no hope of advancement because as a fox, he doesn’t reach the weight requirement necessary to pull giant sleds of parcels. But when Otto Von Walrus (John Cleese) — an evil walrus with robotic spider legs, backed by an army of aggressive puffins — kidnaps those famous sled dogs, it’s up to Swifty to take over the business, solve the mystery, get over his ego, win the heart of the girl, and solve global warming.

It’s the kind of celebrity cast that screams “these were the famous people who had free time that week.” They each put a little energy into their roles, and for some reason Heidi Klum did double duty, playing both Bertha and Jade, a brilliant engineer fox who’s also Swifty’s would-be girlfriend. Renner and Huston seem particularly present and try to eke laughs out of whatever the material gives them, but only Cleese seems to be giving 110%. His evil walrus has so much whimsical scorn for the other characters that it eventually rubs off on the audience. We may not want him to rule the world, but we definitely wish he’d get more screen time.

Directed by Aaron Woodley (“Spark: A Space Tale”), the film has a pleasingly crisp aesthetic. It lacks the detail of more elaborate productions, but it’s clearly evoking a storybook, with uncomplicated character designs and locales. It’s colorful when it needs to be, energetic when it needs to be, and efficiently straightforward the rest of the time. Overall, “Arctic Dogs” evokes memories of classic holiday specials more than contemporary feature films, which is no bad thing.

The story is best when it’s playful and odd, and only truly pops when Cleese’s eccentric supervillain is on-screen. The rest of the time it’s merely a functional series of events, in which a hero gets what he wanted, briefly becomes a bit of a jerk, and then reverts to heroism when he realizes he’s losing his friends. There’s nothing terribly wrong with the plot of “Arctic Dogs,” but adults in the audience may find themselves nodding off a bit in the beginning, and the middle, and the late middle.

The characters don’t really make much of an impression, unless they’re an evil robo-spider-cyborg-walrus, but at least the themes are well-intentioned and mostly harmless. Swifty learns the importance of self-respect and honesty, and everyone learns that evil millionaires burrowing into the ground to release gas has horrible effects on the environment and eventually leads to an army of puffins in Kaiser Wilhelm pointy helmets invading Alaskan communities with snowball guns. You know. Just like we’ve all heard about on the news.

“Arctic Dogs” doesn’t amount to much of anything. Kids will get simplistic messages about saving the environment and being true to yourself, and grownups will get just enough time to enjoy a single REM cycle. For some that’s a glowing recommendation, and it’s fair to say that the movie probably wasn’t made for anybody else. “Arctic Dogs” is a functional, distracting kids flick that’s only remarkable in how unremarkable it is.