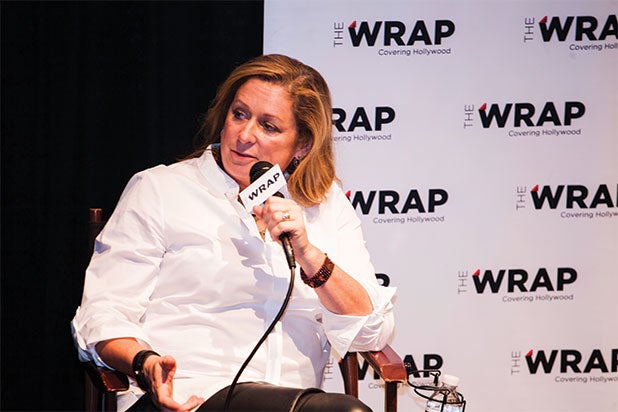 “The Armor of Light” director Abigail Disney has identified what she sees as a subtle yet significant distinction between what’s stalling efforts to address gun violence in the U.S. and what will advance them.

“I made this film because I believe in my heart that there first has to be dialogue,” said Disney. “There is no dialogue right now, there is just debate.”

Disney waded into the ongoing conversation over whether the government should invoke tighter restrictions on firearms purchases after TheWrap‘s Award Series screening at the Landmark Theater in Los Angeles on Thursday night.

She continued to parse both terms, stating that in dialogue the “difference is no one is a victor and no one walks away with a title in their hands … Other people are invited into the conversation and are allowed to have their opinions without being trolled by people like you and me.”

Ambitiously tackling two controversial topics, Disney’s directorial debut follows an evangelical minister and the mother of a teenage shooting victim to explore whether it’s possible to be both pro-gun and pro-life. The minister, Reverend Rob Schenck, is on the political far right, but over the course of the film does an about-face on the issue, finding the courage to preach about the urgency of gun violence action.

When Disney found Schenck after a long search for the film’s subject, she said he stood out to her because he was the only one, out of all of the ministers with whom she spoke, who admitted that he can no longer pretend he doesn’t know about the problem.

“I really wish you were wrong,” Schenck said to Disney. “There is a deep moral failing in the center of my community, and I can’t pretend anymore I don’t see it.”

Unfortunately for Schenck, his efforts to shed light on the topic sent his career and his Faith and Action organization, a Christian outreach group ministering to top-level government officials, spiraling.

“He’s lost a lot of donors and his organization is in a slow-motion collapse,” Disney told the audience during the Q&A. “He’s a good person. He doesn’t want to close doors and doesn’t want to walk away from debt, so he has big problems to solve and not a lot of time or money to solve them with.”

Although Disney deliberately kept the film quiet while making it, it’s been gaining momentum since its debut at The Tribeca Film Festival in April. Even Sarah Palin, who is featured in the film, tweeted about it. But the production prompted at least one annual sponsor of Schenck’s organization to drop out, costing him $50,000 in donations.

Along the way, Schenck meets Lucy McBath, who lost her son Jordan Davis when Michael Dunn shot him at a Florida gas station in 2012. Since the shooting, McBath has dedicated her life to ending gun violence, specifically targeting the state’s “Stand Your Grand” law, which made it difficult for a grand jury to decide whether to indict Dunn on first-degree murder charges. Disney said that it was pure happenstance finding McBath, who was more than willing to talk about her experience and the life she’s chosen to lead.

But others depicted in the film weren’t as happy about the intrusion of a Hollywood filmmaker, said Disney, which is why she took a very honest approach in getting them to trust her.

“I was very open and honest with everyone,” she said. Every room I walked into, I said, I’m a liberal, I’m everything you despise, and I promise not to disrespect you … I made them a very honest and sincere promise that I would not ridicule them, that I would not make light of what they thought, that I wouldn’t make them look stupid.”

Moreover, she felt that her last name convinced people to be freer with their opinions. After all, she is the granddaughter of Roy O. Disney, brother of Walt, though she has tried to distance herself from her family legacy. In fact, the first time she ever used her last name, she said, was when she tried to find an appropriate subject for her film, and consulted with former Walt Disney Chairman Dick Cook to connect her with people crucial to its development.

All in all, she saw America’s obsession with guns as a way to move from executive producing films like “The Mask You Live In” to directing her first.