Arnold Schwarzenegger kicked off a gathering of movie theater and studio executives on Wednesday to declare that after a long year of darkened screens due to the coronavirus pandemic, “Movies are back.”

“Yes, we’ve been in a pandemic year, and people had to watch movies on their little iPhones, little iPads…you had to put glasses on, they’re missing the special effects and visual effects on the big screen,” the “Terminator star said glory at a special showcase event at AMC Century City co-hosted by CAA, the National Association of Theatre Owners (NATO), and the Motion Picture Association (MPA). 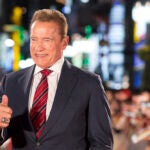 Wednesday’s event served almost as a one-day version of CinemaCon, the annual movie theater trade show in Las Vegas where studios show off their upcoming films to exhibitors. (That event, typically held in March, was canceled last year and is currently scheduled for this August.) Similarly, execs for 10 studios appeared at the presentation with filmmakers and new footage from their upcoming summer attractions.

Theater owners and studio execs are hoping that box office numbers will surge starting with the Memorial Day weekend release of Disney’s “Cruella” and Paramount’s “A Quiet Place — Part II,” though “Cruella” will also be released as a premium title for Disney+ streaming subscribers. Those releases will be followed by a June slate that includes Universal’s “F9” and Warner Bros.’ “In the Heights,” which the studio prominently featured with an eight-minute clip of the musical’s opening sequence.

The pandemic severely crippled the global box office in 2020, with worldwide grosses tumbling by $30 billion to around $11 billion. Theaters in China have rebounded over the past eight months, and year-to-date grosses there have largely recovered at just under $3.6 billion.

Other parts of the world have been slower in their recovery, with only 66% of theaters in the U.S. and Canada having reopened so far. Europe and Latin America are further behind, as the U.K. and France are only now reopening this weekend with British theaters limiting audience capacity to 50% while French theaters will have a 35% limit.