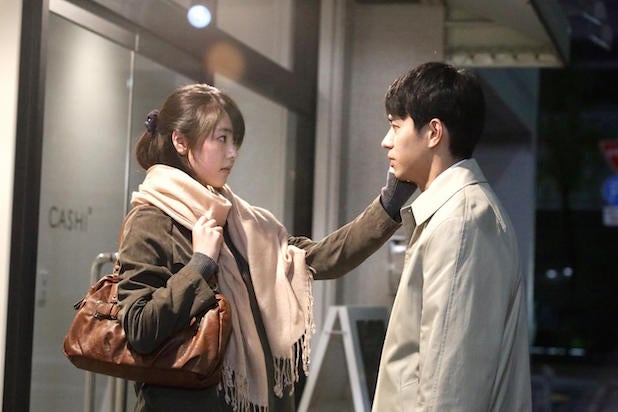 On a day that saw the return of Lars von Trier to the festival that had declared him persona non grata seven years ago, the first screenings of Spike Lee’s incendiary “BlacKkKlansman” and the press unveiling of Hirokazu Kore-eda’s instant Palme d’Or contender “Shoplifters,” it was easy for Hamaguchi Ryusuke’s “Asako I & II” to get lost.

But maybe that’s appropriate, because the gentle, leisurely story that the Japanese director tells deals with a lost love, a lost cat and other things that can disappear if we don’t hold on.

As a director, Hamaguchi has never been in a hurry; his 2015 festival favorite “Happy Hour” in fact stretched on for a full five hours. At just over two hours, “Asako” is less than half that — but it’s a small story, based on Tomoka Shibasaki’s 2010 novel, and the film lingers over ever detail.

The film, which premiered in the main competition in Cannes on Monday, has languid pacing and a placid mood – even when fireworks literally go off the first time our two lovers kiss, they’re the kind of little fireworks that pop and sizzle. Big booming just wouldn’t do for these lovers, or this movie.

Curiously, Asako (Erika Karata) and Baku (Masahiro Higashide) often act impulsively, even if the movie never does. She tails him in an art museum, then out onto the street, and before you know it they’re kissing (cue the fireworks) and are inseparable.

The tousle-haired Baku, though, is not the committing kind; he says he’s going to the store to get bread, doesn’t come back until the morning and spins a dubious tale of stopping into a public bath, meeting an older guy, going to the guy’s house for a drink and falling asleep there. Asako seems ready to forgive him because that’s the kind of girl she is, and then titles on the screen matter-of-factly dash her dreams: “Baku went out to get shoes and never came back.”

The story jumps ahead two years to find Asako meeting a guy who looks just like Baku (he should, since it’s the same actor with a new haircut). This time it takes her longer to fall in love, but she does – or is the new man, Ryohei, just a more reliable placeholder for the wilder Baku?

We don’t know, and the movie is too laid-back to make this seem a matter of much urgency. But then Baku resurfaces as a successful model and actor, and he wants Asako back, and she’s torn between two lovers, though in a very passive way.

In many ways, “Asako I & II” is a lovely meditation on memory and loss, about the power that the past can have to keep us from growing. At least, it is that until Hamaguchi suddenly crams a lot of plot into the last half hour, with Asako making one impulsive decision after another as the mood the film has tried to hard to establish takes a hit.

There are moments of real beauty in the film, which is an unassuming and contemplative excursion into how we love, and why. But like the fireworks that greet Asako and Baku’s first kiss, its pop is a modest one.