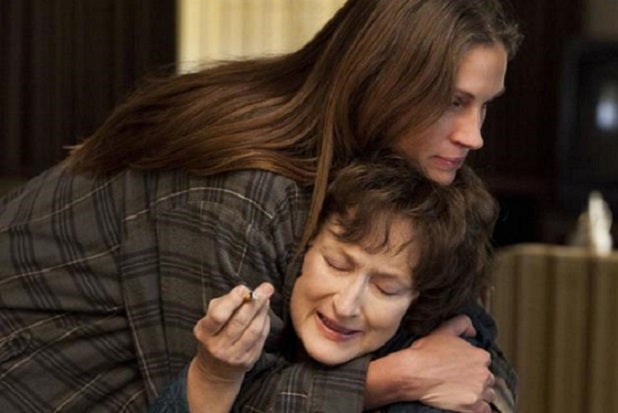 “August: Osage County” got off to a solid if not spectacular start in its limited box-office debut, grossing $179,475 from five theaters.

That’s a $35,895 per-screen average for the Weinstein Company’s star-studded dysfunctional family drama. That’s below the recent limited openings of some other Oscar hopefuls. “America Hustle,” for example, averaged $123,409 on six screens, and “Inside Llewyn Davis” averaged $101,353 in four theaters.

But those films weren’t facing the marketplace challenge that “August” was.

“Given how crowded this Christmas was, and how strong our exit polls were, we’re very happy with that number,” said TWC distribution chief Erik Lomis. It played as expected in terms of demographics, with 58 percent of the audience female and 66 percent over the age of 45.

Streep and Roberts earned Golden Globes nominations, and TWC is hoping to capitalize on those and potential Oscar nominations as well, and will expand it nationwide on January 10.

“Lone Survivor,” Peter Berg’s Afghanistan-war drama starring Mark Wahlberg, opened at the Lincoln Square in New York and the Arclight Hollywood and took in $92,500 – a $46,250 average for Universal.

“The Invisible Woman,” the drama about Charles Dickens’  mistress Ellen Ternan, brought in $37,149 from three theaters in its debut over the weekend for a $12,383 average. The Sony Pictures Classics release, in which Ralph Fiennes stars and directss, has made $58,265 since opening on Wednesday.