James Cameron’s “Avatar: The Way of Water” is currently breaking box office records (as of writing this article it is already the seventh highest-grossing movie of all time) and is a visual feast unlike anything that has come before it.

But more dazzling than any special effect is the movie’s emotional center, supplied largely by the performances of Zoe Saldaña and Sam Worthington, who are raising their kids on Pandora and trying to protect them from external threats (like the villainous RDA). They eventually move the family to another part of the planet and fall in with the reef people, a band of mostly underwater Na’vi. It’s a fairly straightforward story but the emotional heft supplied by their performances (and the genuinely harrowing scenarios Cameron puts them in) make the movie something entirely else altogether.

TheWrap spoke to Saldaña and Worthington about how their experiences as parents informed their performance, how far back Cameron started discussing the sequels and whether or not they regretted signing on for so many. 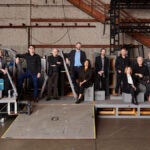 When did James first start talking to you about a sequel or sequels?

Zoe Saldaña: I think when we were shooting the first “Avatar.” It was more, “When I grow up I’m going to do this,” that kind of essence, which was quite endearing. It’s like, “Well, if this movie does well, and we prove this concept, I have so many ideas for what we’re going to do in Pandora.” And that was very promising. Never in a million years could we have imagined the reception that “Avatar” was going to have. So in 2013, I think at the premiere or during award season, Jim’s like, “Oh yeah, we’re going to totally go back.” And it wasn’t until 2013 when he told us. He reached out to all of us individually and said-

Sam Worthington: He figured out how to extend it.

Zoe Saldaña: “I have begun writing.”

Sam Worthington: Yeah. He said, “Rather than make a carbon copy, I’ve figured out how to extend the planet, extend the family.” And that was about as clear as it was. And then 2015, we both went and saw a room full of the visuals of the saga. And I think my wife was heavily pregnant at the time, and we’re seeing a movie in this drawing form of a family, and we’re thinking we’re about to go on this journey. And it was like… It wasn’t cut into movies. It was just this really emotional journey through pictures at that point. And then you’re going, “Well how are we going to do that?”

You both had children since the last movie…

Zoe Saldaña: Oh, we have a soccer team. We have three boys each.

But did that life experience inform your performance?

Zoe Saldaña: Fear. When you’re young, you’re fearless. You just don’t think about consequences, and you’re in such a present mode. And any challenge, especially if someone like James Cameron comes to you is like, “Climb that wall.” Sure, bring it on. Watch me. Watch this. And then you have children, and you care for their lives more than you care for your own. So any hypothetical scenario that may threaten the very source of your happiness and your purpose is unimaginable. They’re that. The Sullys are that relatable. Jake and Neytiri are that relatable. 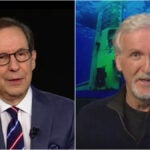 This is obviously a huge movie and, in many ways, more expansive than the original but with a much more intimate emotional center.

Zoe Saldaña: Yeah. We were challenged.

Sam Worthington: Protecting your family, but the family also that you choose, that the young kid makes friends with an outcast, Tulkun, or armor-plated whale. And that in itself is a very emotional bond that they create. And so it’s about protecting all that you love. And when you are feeling displaced, when you are feeling outcast, when you’re feeling at your worst, all you really have is the people close to you that you can stick together.

Where are you both in your “Avatar” saga? Should you be in New Zealand right now shooting something?

Sam Worthington: They’re probably still going. It was weird because, yeah, it wasn’t like there was a 10-year break. We were still doing stuff earlier in the year for performance capture, and Jim only locked off I think Friday. 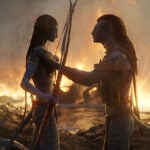 Yeah, he said five days ago was the first time he saw it finished.

Sam Worthington: That’s it. It’s a labor of love for Jim, that’s what it is. He doesn’t look at it as, “I’m going to make a film.” He puts everything into it. They’re the type of guys you want to go and make movies with.

Were you apprehensive to sign on for so many sequels at once?

Sam Worthington: No, it’s Jim, man. Why would you-

Zoe Saldaña: No. He could have said 60 movies, and I would’ve been like, “Done. Where’s the pen in the paper and I’ll sign right here. Done.”

Sam Worthington: You want work with a collaborator that respects everybody. Whether you’ve never done a movie or Kate Winslet who is an icon. You want someone that can navigate his way amongst all of those people and leads by example. The guy took up the hobby of free diving. That wasn’t just something he asked us to do. He’d already conquered it before he asked us to do it.

“Avatar: The Way of Water” is in theaters now. 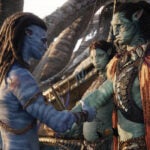 Also Read:
Every ‘Avatar: The Way of Water’ Costume Was Made in Real Life Before Being Scanned Into a Computer
x