This interview with the “Avatar: The Way of Water” production designers first appeared in the Below-the-Line Issue of TheWrap’s awards magazine.

On paper, the production design of “Avatar: The Way of Water” seems as if it would be an enormous undertaking. But as soon as he starts talking about the particular challenges of the job, production designer Ben Procter upped the ante.

“It’s not a production-design job where you’re designing a film,” he said. “This is a bigger project. It’s designing an entire universe. It’s making a real world that is coherent and makes sense that is rooted in real science and real engineering.”

That world-building began on the first film, but it increased exponentially on “The Way of Water,” which explores huge new areas on the planet Pandora. “We had to create a guidebook for the ecosystem,” supervising art director Aashrita Kamath said. “The script might have a description of a creature, but in terms of the ecosystem, we had to figure out which creatures played nicely together and which ones didn’t.” 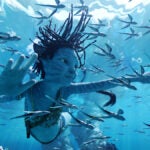 Set decorator Vanessa Cole said she delivered 63 sets to the production, ranging from vehicles to laboratories to sets that had been used in the first film. “We fabricated an awful lot of furniture and contacted scientists and laboratories in New Zealand to put some facts and credibility behind them,” she said. “But there were legacy pieces we refurbished as well. It was nice to bring the past into the present.”

Most of the designs were CG oriented, existing only virtually and being added after the actors had done their work on motion-capture stages. But production designer Dylan Cole points proudly to the home where Jake Sully and his family stay in the Metkayina village, home to a tribe that lives in woven, hammock-like structures by the sea.

“It’s one of the coolest things we made, and we actually built it as a one-sixth scale miniature,” he said. “It was a research exercise as much as anything, but it was scanned by Weta FX for the final model. And it was legit woven. We had amazing New Zealand weavers doing traditional techniques to work on that thing.”

Considerably less organic was the Sea Dragon, the huge armored ship that an expedition from a dying Earth uses to hunt down Sully and attack the Metkayina people. “It was the absolute hardest, largest problem to solve,” Procter said. “It’s gotta look menacing, so it kind of feels like a manta ray.

“But then you have 60 different story points that involve geographical relationships and eyelines. As you can guess, the tactical and logistical details were unbelievably difficult to figure out.”