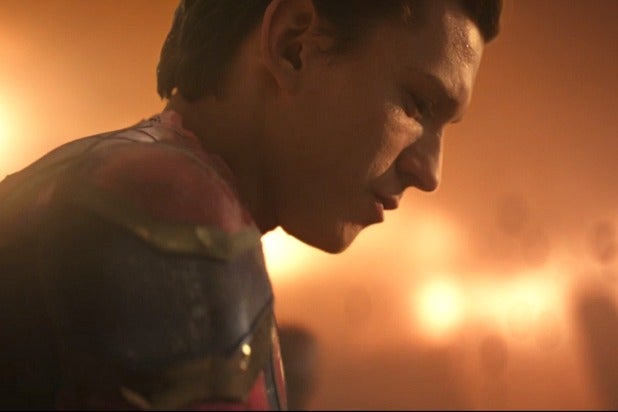 (Some big spoilers ahead for the ending of “Avengers: Infinity War.” In case you’ve managed to find your way into this article despite having not seen the film or been spoiled on how it ends.)

The undisputed movie scene of the year so far in 2018 is the end of “Avengers: Infinity War,” after Thanos (Josh Brolin) snaps his fingers and so many big important superheros turn to dust in front of our very eyes. And within the sequence is the moment of the year, which has been adopted as a joke and a meme that has come up obnoxiously often in the last three months.

I’m obviously talking about the death of Spider-Man (Tom Holland) — that part where young Peter Parker announces to Tony Stark that he doesn’t feel so good before he slowly fades away himself.

Spider-Man is, in fact, the last one to go, not counting Nick Fury (Samuel L. Jackson) and Maria Hill (Cobie Smulders) in the post-credits scene. And for good reason — the death of Peter Parker, who is just a teenager, is both the most emotionally fraught death of them all and also symbolic of Tony Stark’s (Robert Downey Jr.) failure. Tony has basically functioned as Peter’s stepdad up to this point, and Peter’s death is even more of a gut punch for Tony than everyone else’s.

That part is also notable because Spider-Man takes way, way longer to turn to dust than everyone else does. Most of the characters go from completely whole to pile of dust in about a second or so. But in Spidey’s case, it takes almost 30 seconds for him to die from the moment he utters that “I don’t feel so good.”

I had just chalked this phenomenon up to creative license, like when characters who are fighting each other pause to talk for no reason. For example, when Iron Man punched Thanos really, really hard, and Thanos takes a long moment to heckle him for only managing to make a slight cut while Iron Man just stands there watching instead of trying to hit him again.

But it turns out, according to co-director Joe Russo, that there was actually a story reason for Spider-Man taking so long to die.

Also Read: 'Avengers: Infinity War': Here's Why Thanos Waited to Go After the Infinity Stones Himself

Speaking on the audio commentary that accompanies the home video release of “Infinity War,” Russo reflected on the change that sequence went from how it was written. Initially, it was going to be a quick death like everyone else’s, but they changed it when it came time to shoot the scene.

“If I remember correctly, right, it was ‘I don’t feel so good’ — Tony looked at him, he said, ‘I’m sorry,’ and disappeared,” Russo said, describing how they had originally planned the scene. “And at the end of the day, he kept driving to put more and more emotion into it. And just went up to Tom and said, ‘You don’t wanna go. You’re a child. And you’re using your strength as Spider-Man to fight this.’ And then that was the performance that came out.”

So, yes, it turns out there’s an actual in-universe reason why Peter Parker was able to hold on longer than everyone else when Thanos’ cosmic finger snap came for him. Of course, he still ended up as dirt despite his apparent ability to resist — there’s no escaping if your name comes up in that cosmic lottery.

We know, of course, that Spider-Man will be back in two movies next summer — both “Avengers 4” and “Spider-Man: Far From Home.” And we can’t help but wonder if this little nugget will have some story implications in one or both of those films. Probably not, since it really was ultimately just a bit of a creative flourish but, hey, you never know.

The home video release of “Avengers: Infinity War” has introduced a lot of new information about the state of the MCU. Here’s everything we learned from the “Infinity War” director commentary, and why Red Skull is probably pretty happy about the Thanos situation. We also learned you don’t have to be “worthy” to wield Thor’s new “Stormbreaker” axe; the reason why Thanos didn’t go after the stones years ago; and why Thanos didn’t just double the universe’s resources.