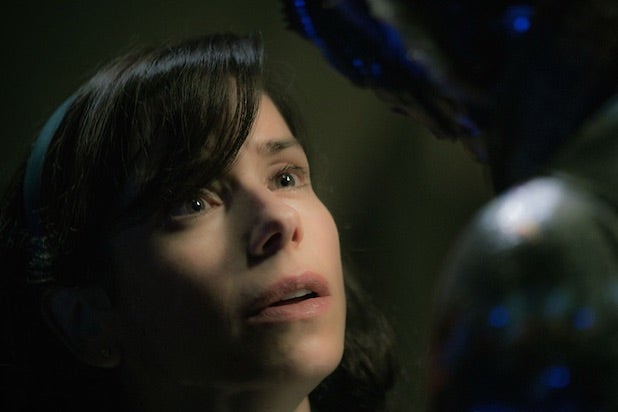 "The Shape of Water" / Fox Searchlight

While awards contenders have been released so far this year — including “Get Out,” “The Big Sick,” “War for the Planet of the Apes,” “Detroit” and especially “Dunkirk” — the season really arrives with the Venice, Telluride and Toronto Film Festivals, which hit back-to-back-to-back and bring with them dozens of movies that hope to be in the awards conversation from now until Oscar night.

Venice, which began on Wednesday, was the first out of the gate, and it launched with Alexander Payne’s “Downsizing,” a sci-fi-ish comedy starring Matt Damon that immediately won rave reviews.

Venice will also showcase Damon in George Clooney’s “Suburbicon,” a comedy written by the Coen brothers that figures to contain their usual dark wit. And it’ll show a pair of genre films that might be far more than generic, Guillermo del Toro’s “The Shape of Water,” which has as much advance buzz as any film coming into the season, and Darren Aronofsky’s “Mother!” a horror film starring Jennifer Lawrence.

On Friday, Telluride kicks off in the mountains of Colorado. The four-day boutique festival doesn’t announce its lineup ahead of time, but it is expected to world premiere Jonathan Dayton and Valerie Faris’ “Battle of the Sexes,” about the 1973 tennis match between Bobby Riggs (Ste Carell) and Billie Jean King (Emma Stone); Joe Wright’s “Darkest Hour,” starring Gary Oldman as Winston Churchill on the of World War II; Greta Gerwig’s “Lady Bird,” starring Saoirse Ronan; Scott Cooper’s period western “Hostiles,” with Christian Bale; and Angelina Jolie’s “First They Killed My Father,” a young girl’s story from the murderous Khmer Rouge regime in Cambodia that was shot in that country and is entirely in Cambodian.

The Toronto International Film Festival, which begins on Sept. 7, three days after Telluride ends and three days before Venice ends, will have many of those same films, providing a bigger platform of viewers and international press than the contenders received at the more rarefied fests.

Its own world premieres will include Andy Serkis’ “Breathe,” with Andrew Garfield and Claire Foy; Aaron Sorkin’s “Molly’s Game,” with Jessica Chastain as the woman who ran a high-stakes, star-studded poker game in Los Angeles for years; Susannah White’s “Woman Walks Ahead,” which also stars Chastain, this time as the white woman who became one of Sitting Bull’s chief confidants; Hany Abu-Assad’s “The Mountain Between Us,” a survival story with Kate Winslet and Idris Elba; David Gordon Green’s Boston Marathon bombing drama “Stronger,” starring Jake Gyllenhaal; Neil Burger’s “The Upside,” a remake of the French hit “The Intouchables” with Bryan Cranston and Kevin Hart; Alfonso Gomez-Rejon’s “The Current War,” with Benedict Cumberbatch as Thomas Edison and Michael Shannon as his rival George Westinghouse; and “Kings,” “Mustang” director Deniz Gamze Erguven’s look at the 1992 Los Angeles riots, starring Halle Berry and Daniel Craig.

Rumors persist that “Nightcrawler” director Dan Gilroy will come to Toronto with his upcoming drama “Roman Israel, Esq.,” although that Denzel Washington film has yet to be announced.

Most of those films have yet to be screened in any significant way, and will come out of the festivals with their awards credentials either burnished or tarnished. If history serves, there will be more of the later than the former.

Still, “Downsizing” got awards season off to a positive start, and the films that from this vantage point seem likeliest to join it in the Best Picture race could be “The Shape of Water,” “Darkest Hour,” “Battle of the Sexes” and “Suburbicon.”

If you’re looking for dark horses, they could come in the form of “First They Killed My Father,” which would be the first foreign-language film since “Amour” to contend for Best Picture; “Three Billboards Outside Ebbing, Missouri,” which McDonagh’s history suggests would be blacker and more violent than the usual best-pic fare; and Woody Allen’s “Wonder Wheel,” which closes the New York Film Festival in October and could capitalize on lingering affection for the controversial director and on what is reportedly a powerhouse performance from Kate Winslet.

Richard Linklater’s “Last Flag Flying” is also a potential sleeper out of NYFF, a sequel of sorts to “The Last Detail” starring Bryan Cranston, Steve Carell and Laurence Fishburne.

And after New York, the stragglers will continue to be released until Christmas Day. The 800-pound gorilla of that bunch is clearly Steven Spielberg’s “The Post,” his story of the Washington Post’s battle with the government over the Pentagon Papers; a serious Spielberg movie about conflict between the press and the presidency could hardly be timelier, even if it is set in the early 1970s.

Paul Thomas Anderson has been less of an Academy favorite since “There Will Be Blood,” but his untitled (and reportedly steamy) film about the fashion industry could obviously be a major player, as could Michael Gracey’s P.T. Barnum biopic “The Greatest Showman,” Denis Villeneuve’s “Blade Runner 2049” and Ridley Scott’s “All the Money in the World,” a crime drama about the 1973 kidnapping of John Paul Getty III.

So who’s got the inside track? Who knows? At the moment I could see a best-picture lineup that includes “Dunkirk,” “The Post,” “All the Money in the World,” “Downsizing,” “The Shape of Water,” “Darkest Hour,” “Battle of the Sexes,” “Roman Israel, Esq.” and “Suburbicon” — but only one of those films has been seen by more than a handful of voters, so we’re still firmly in the “nobody knows anything” phase of awards season.

Check back in two weeks, though. The landscape is about to change, quickly and dramatically.